RSS
← Boy, could I use a beer
An overview of Cell Cycling in Humans →
Aside
10 Oct

Cell Division is an essential part of life. However, this means different things to different cells. For single-celled organisms cell division is reproduction – one mother cell divides into two daughter cells. If these single-celled organisms are prokaryotic, then this division happens by the relatively simple process of binary fission. If the organism is eukaryotic, division occurs by a more structured process of mitosis.

Regardless of the differences between these organisms, cell division consists of three core components:

In Prokaryotes, this describes the cellular events perfectly. The circular DNA (arguably a chromosome) is duplicated, the two copies of the DNA goes to opposite sides of the ce

ll and cytokinesis divides the cell in half along the midline.

An illustration of a number of bacterial cells undergoing binary fission:

The entire process is outlined below: 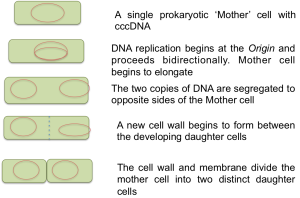 In eukaryotes, the same basic process occurs, but because of the differences in how DNA is organized and localized (in a nucleus), differences emerge.

The basic form of eukaryotic cell division is called mitosis. In single celled organisms this process functions as an asexual form of replication, while in multicellular eukaryotes, this form of division serves to add to the cell number (i.e. growth / healing).

There are four phases of mitosis:

Each stage of Mitosis is defined by a number of events describing the organization of the DNA, the state of the nuclear membrane and the development of mitotic spindles that maneuver the chromosomes within the cell. I won’t describe these here as this can be found in any number of other sources.

The chromosome number is referred to as ‘n’.

The DNA copy number is referred to as ‘c’.

This 23 number we keep talking about is the n number in humans.  Each species n number may be different, but all the members of that species have the same n number. Further, the n number does not change at any time during the cell’s life

Because we have one chromosome from each of our parents in every one of the cells of our body we are diploid organisms (from the Latin, di – meaning and two ploid – well, ‘ploid’ doesn’t really come from Latin)

All the cells in our body are diploid – except the gametes (sex cells). These cells are formed by a special kind of cell division called meiosis. This type of division is very similar to mitosis, except that it consists of two separate rounds of division and the resulting sex cells have only one of each chromosome type and are therefore called haploid (think ‘half’)

Cells of the body are 2n = diploid.

This leaves the c number…

The easiest way to determine the c number is to simply count the number of chromatids for each type of chromosome.  Consider the cells below. On the left is a cell in G1 phase of the cell cycle. Then the cell goes through S phase where DNA replication occurs and looks like the cell on the right. 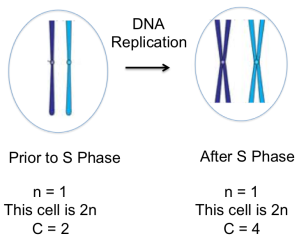 Note that the n number does not change, but the c number doubles when the number of chromatids doubles.

* It’s important to note here that not all organisms have similar patterns of chromosome arrangements as we humans do. In this essay I am referring to humans and organisms that handle their DNA as we do.

Posted by downhousesoftware on October 10, 2012 in Uncategorized

← Boy, could I use a beer
An overview of Cell Cycling in Humans →