An overview of Cell Cycling in Humans

Consider Leonardo here, who is going to be making sperm cells via meiosis. In this figure we’re tracking n number, chromosome number and c number with every division. Note that because we are following human cells – the n number always remains 23. However, the ‘ploidy’ will change between haploid(n) and diploid(2n) and c number will change between 1,2 or 4 depending on ploidy and whether the chromosomes have one or two chromatids.

Once sex cells(sperm) are formed, we see the combination of sperm and egg during fertilization to form a zygote which restores the diploid condition. Then this cell goes into cycle many times over going through mitosis again and again as the organism grown from zygote into a full grown person. 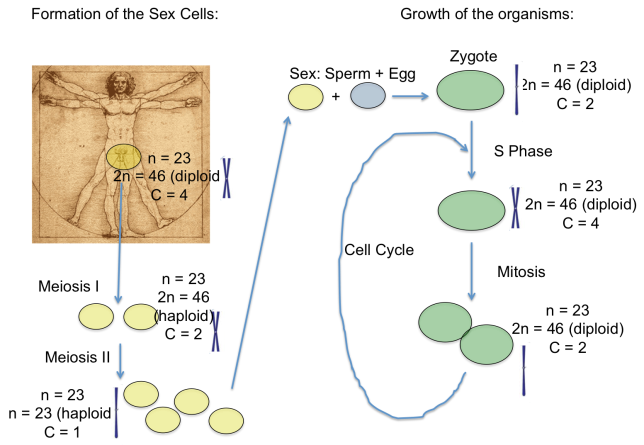 Posted by downhousesoftware on October 11, 2012 in Uncategorized

One response to “An overview of Cell Cycling in Humans”