Crossover events in Prophase I of Meiosis

There are two mechanisms for establishing diversity amongst progeny that are employed in meiosis. The first is independent assortment, which is the random distribution of chromosomes into sex cells, the second is crossover events that randomize DNA between paired homologous chromosomes.

Recall that in Prophase I pairs of chromosomes come together. This will ensure that when the chromosomes are distributed between the two daughter cells produced in Meiosis I each cell gets one of each pair. The pairing forms a structure known as a tetrad (referring to the four chromatids of the paired chromosomes). When the chromosomes are joined in this way it is possible (indeed likely) that there will be breaks that occur and swapping of genetic material from one chromatid to another.

Here’s a good (but dry) animation of this process presented by McGraw Hill:

Thomas Hunt Morgan ran one of the first labs studying crossover events (he was looking at fruit flies). We’ll be looking at his work in my class later in the semester, but here’s a preview that might help visualize what is happening using Morgan’s own sketches. This is the same process as described above, however Morgan only drew one chromatid for each chromosome – this does make the illustration simpler, but keep in mind that there are two chromatids present in the chromosomes of organisms during this stage (Prophase I) 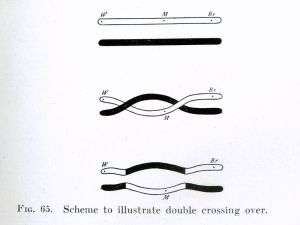 Posted by downhousesoftware on October 16, 2012 in Education