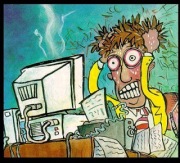 Two minutes into my latest coursera lecture (introduction to interactive programming in python) the instructor indicated his frustration in javascript programming saying that it’s a terrible language. This may be the case… so far I don’t have a lot to compare against, but I have been enjoying learning JS in codecademy and I’m dying to know why he thinks so.

If you have experience programming in javascript and python (or other languages…ruby?) let me know if you agree with the above statement and what makes you think so. As a new programmer I am interested in learning as much as possible – if I can understand what faults people see in these languages I think that would be very instructive.

Posted by downhousesoftware on October 25, 2012 in Uncategorized

3 responses to “Two minutes into my latest coursera lecture….”