Who said what about the molecular basis of inheritance? First steps towards the double helix

Gregor Mendel did the first documented, accurate analysis of how one generation inherits traits from their parents’. However, being so far ahead of his time, and possibly because he may have been considered an outsider to the scientific community, the value of his work was not grasped and it was quickly forgotten. Mendel had stated a couple of theories in his paper making theoretical assumptions of how ‘factors’ responsible for inheritance are segregated during the formation of gametes and then rejoined in the zygote. Together, the two factors that every individual had for each trait determined the expression of that trait. 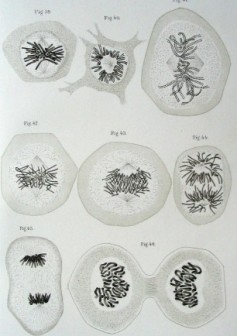 A couple decades later Walther Flemming observed, under his microscope, some curious movements of things called ‘chromosomes’ (or colorful bodies). Unfortunately, he did so without knowledge of Mendel’s work and thus didn’t recognize the greater meaning of his discovery. At this time Germ Plasm Theory (not to be confused with Germ Theory) was being debated as a means of inheritance. This theory suggested that special germ cells carried the hereditary material from one generation to the next and that these cells were uninfluenced by the other cells of the body. The plasm itself took the place of Mendel’s idea of factors, but functioned as a more inclusive measure of material, more akin to what we call the genome today. I say ‘plasm’ is replacing ‘factors’, but it should be noted that no one intentionally renamed Mendel’s factors. The real problem was that no one knew about his work at all.

Edouard Van Beneden had been investigating similar chromosomal movements during meiosis that produced the gametes, or germ cells. However, he too was having a difficult time constructing a cogent theory concerning how these movements led to inheritance. 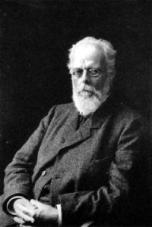 August Weismann was in the best position at the time to put the pieces together as he was already turning the available information over in his mind to construct a big picture. He recognized that the nucleus was the likely source of the ‘plasm’ and even considered the chromosomes as a possible candidate for this material. Further, he was concerned with how it was that germ cells could join in a way that did not double the heritable material with every generation.

It was not until Sutton and Boveri  independently unearthed Mendel’s work and recognized the similarity of chromosome movement during gametogenesis (making sperm and egg cells) to his descriptions of ‘factors’ that The Chromosomal Theory of Inheritance was first seriously proposed.

Altogether, these observations led many to believe that it was, indeed, the chromosomes that carried the genetic material. Still, this did not pinpoint what molecule was responsible or how it accomplished this for chromosomes are comprised of long strings of DNA and a number of proteins. Given the simplicity of DNA, many refuted this as potential genetic material as it simply could not carry the required information. Perhaps it served as a scaffold for the more important protein molecules? This was consistent with the chromosomal theory and had the benefit of allowing for complicated proteins to bear the information required to build new cells and organisms. 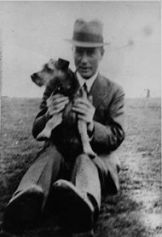 Griffith with his pal Bobby

Fredrick Griffith was one of the earliest workers to begin the march to identify the specific molecules that functioned as heritable material. While working to develop a vaccine against Streptococcus pneumoniae, he discovered their curious capacity for communicating information laterally, from one organism to another.

Two forms of the bacteria were known: One a virulent smooth form that secreted a protective carbohydrate capsule, and Secondly, a rough strain that lacks this protective coating and is non-virulent. Predictably, mice he infected with the smooth strain died as a result of bacterial overgrowth. Mice infected with the rough strain overcame the infection and lived. Also, as one would predict, heat-killed bacteria of both strains had no ill effect on mice. But what Griffith did next was much more interesting…

He took heat killed smooth bacteria and combined it with the non-virulent rough form and found that the resulting cocktail of bacteria not only killed mice, but these mice were also found to be overgrown with the smooth form of the bacteria.

What are the possible explanations?

Griffith chose the simpler second option and suggested that some transforming factor was responsible. This factor was released by the dead S strain and carried heritable information.

Unfortunately, Griffith wasn’t around long enough to see the story play out as he perished during the German air raids of London during WWII. But one last experiment done by another group illustrated that he was one the right path. This experiment repeated Griffith’s work carefully, but instead of combining S strain and R strain bacteria, the S strain bacteria were spun down into a pellet using a centrifuge and only the liquid supernatant was moved in with the R strain bacteria. As Griffith might have suggested, this liquid carried his transforming factor and was sufficient to cause a change in the R strain to make it produce and secrete the carbohydrate capsule.

This last experiment and some others were done by the laboratory of Avery, MacLeod and McCarty at the Rockefeller Institute in New York and will have to be discussed in a future post.

Posted by downhousesoftware on November 24, 2012 in Uncategorized