RSS
← It’s Christmastime – Spend a little money on someone you love, it’ll make you HAPPY.
How Old (Con’t) →

This is an interesting question in evolutionary biology. I come to it a lot considering how the things we know of the world tie together.

How old is the universe?

How old is our sun?

How old is the Earth?

How old is life on Earth?

How long has life included something more than just bacteria-like prokaryotes?

How long have people been around? (And what does this question even mean? Do I mean the hominid lineage? Do I mean modern humans? Perhaps humans with language? Civilization?)

I can’t go into all of these at once, but something recently came up that’s on topic with this and specific enough for a post…

In our discussions of Neil Shubbin’s book, my class talked about how old color vision is. How can we answer a question like this anyway? And what ‘purpose’ does color vision serve?

I have my students write essays on their thoughts about each chapter in the book and more than one spent a good deal of time discussing the evolution of color vision. I’m paraphrasing here because I turned back all the essays, ‘How would our eyes know to evolve color vision?’ —An excellent question. I wish we had several more weeks of classtime to discuss questions like this. This semester was difficult for me because we did not get nearly as far into the discussion of evolution and population genetics as I would have liked. It’s my favorite part of the semester, but we just couldn’t get through the material.

How do eyes know to evolve color vision?

For an eight word question, there is certainly a lot to unpack.

1. Language builds anthropomorphism right into itself. I did it right there with that sentence.

It’s the way we talk, and it’s difficult to pull ourselves out of the habit. I do it myself all the time, even though I know it’s misleading. To be honest, I think it’s foolish to break our language from it entirely anyway. Let’s just acknowledge that it’s not the way things work, but only the way we talk and move along. Eyes don’t know. Things don’t seek to evolve. Evolution is driven by chance: chance provides a diversity of forms, the ones that are most fit to survive do so. That’s it. No knowing. No direction. Just chance and selection.

2. What is color? What is it to perceive it? Who perceives it?

Not all animals see in color. Amongst those that do, not all of them see the same colors. This is something that I discussed earlier with respect to bees. As humans, we devote 30% of our total sensory genes to vision. We rely on it a lot and much of how we perceive the world around us is through this sense. But not all animals are the same in this way. Consider two things: 1) All that we see is just our brain’s interpretation of sensory input & 2) Bat’s fly using sonar almost exclusively. How do you think their brains perceive the world?

3. Do we get to choose how we evolve?

Lamarck thought so. He thought that day after day, the things we do and strive to do change our bodies (I’m OK with that) and that these ‘improvements’ get passed on to our descendants (I’m not OK with that). Darwin first realized how it actually worked, he reasoned that there are more organisms born than survive. Amongst all those that were born, there is a wealth of variety, and from this variety, the ‘best’ or ‘most fit’ organisms survive and pass on their genes. Richard Dawkins restates this elegantly as ‘The Non-Random survival of Random variants.’ We don’t choose to evolve in any direction or towards any end whatsoever. Evolution just happens, like gravity happens. And it doesn’t happen to individuals, it happens to species

4. So when did color vision arise? 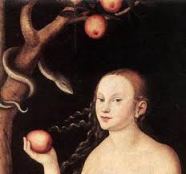 About 50 million years ago. Right about the same time that colorful fruit began appearing. The fruit didn’t know it was being seen. The eyes had no foreknowledge that fruit about to get colorful. They evolved together, not because they wanted to, but because they each helped the other become more successful. Animals with color vision could better see when fruit was ripe for eating; fruit-bearing plants get their seeds dispersed by animals that like their fruit. Everyone benefits. A peaceful co-evolution.

Posted by downhousesoftware on December 18, 2012 in Uncategorized

← It’s Christmastime – Spend a little money on someone you love, it’ll make you HAPPY.
How Old (Con’t) →