RSS
← How Old (Con’t)
The Hobbit: An (Un)expected Disappointment →

Listening to House of Dreams

Today the midwest got hit by its first winter storm. At least it was the first storm to hit the Kansas City area. It even had a name, Draco – I didn’t know storms like this were named. Because of this storm, I had a lot of time in the car going to Home Depot and back to pick up some building materials to repair the workshop (which looks like it has been neglected for a decade or more).

All this time in the car means a lot of podcast listening. We heard the latest Radiolab, which contained a great lead-in story about Aleksander Gamme’s solo walk to the South Pole and back.

But, the podcast that really touched me on a personal level was from Freakonomics. It was about a family home and how it can feel like another member of the family, a living part of your memories. This podcast took a turn to talk about how the host, Steven Dubner’s, home had gone from a family centerpiece to a swingers’ retreat. But that’s not what intrigued me.

Instead, I got to thinking about memories and the feeling of ‘family.’

When I was a kid, I had some wonderful ‘golden years.’ I don’t know how else to describe them. Our family was close – both geographically and emotionally. We celebrated holidays together, had group birthday parties (because otherwise there would be too many) and vacationed together. These vacations were all coordinated by my grandparents, who rented a beach house in Rehoboth, DE every summer and had everyone down.

We spent the days on the beach and the nights playing cards together around the dinner table. Playing cards was my favorite part. We mostly played a version of solitaire, which oxymoronically, combined the games of innumerable players into one raucous mess. We also played Hearts a lot and would delight in not just winning, but pounding one poor victim mercilessly through the night (usually a younger, weak player).

Then, in 1994, my grandmother died and shockwaves went through our family. I think we all knew that she was the one who coordinated things, but none of us knew just how central she was. When she was gone, the family fractured and drifted apart. 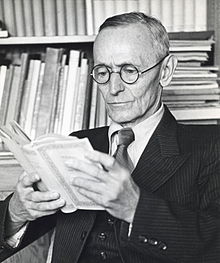 Years later, I think some things have improved, but we will never be the close unit we once were. Perhaps it was inevitable. As families grow, there are simply more people and the family unit refocuses. I’m reminded of the Hermann Hesse novel, The Journey to the East.

This novel has a story, but the story is not what is important. What is important is “The League’s” spiritual journey. From the Wiki page, “Although at first fun and enlightening, the Journey runs into a crisis in a deep mountain gorge called Morbio Inferiore when Leo, apparently a simple servant, disappears, causing the group to plummet into anxiety and argument.”

Leo, the servant was really the leader. Only no one knew this until he was gone.

I never thought of her as a servant, but I never knew how much a leader she was.

Posted by downhousesoftware on December 21, 2012 in Personal Life

← How Old (Con’t)
The Hobbit: An (Un)expected Disappointment →

2 responses to “Listening to House of Dreams”