Why is sex fun? Chapter 1

I’ve decided to start a sort of online book discussion as a way of reflecting on a book that I just picked up and will be reading this spring semester. In the two classes I teach, I am reading Neil Shubbin’s ‘Your Inner Fish’ (General Biology) and Paul Offit’s ‘Vaccinated’ (Microbiology). I’m sure that I will discuss these from time to time here, but there is another book that I just got in the mail yesterday that I’ve been meaning to read for some time, Jared Diamond’s ‘Why Sex is Fun’. This author may be familiar to you for some of his other works including ‘Guns, Germs and Steel’ which I have to get onto my reading list as well. But for now, I’ll go with what I have.

Please feel free to enter into the conversation at any time; I would love to hear your thoughts. Also, I should say that my approach will probably be just to cherry-pick ideas from each chapter for discussion, but don’t let that restrict your comments.

The Animal with the weirdest sex life…

Diamond’s book starts out reminding us just how unique our (human) sex lives are from other species on the planet. He highlights our desire for privacy, couple pairing, having sex when it is improbable or impossible to reproduce, etc. The question he poses is ‘Why did we evolve to be so different?’

One of the first things I noticed was the way he highlighted how females of many other species “solicit sex only during those fertile days, are sexually unattractive or less attractive to males on other days because they lack the arousing signals.”

This quote made me immediately think of an article I read about several years ago that points in the other direction, illustrating how humans are not exempt from their baser animal instincts. This article suggested that humans too had pheromonal or other cues that made women more ‘attractive’ to men during the ovulating stage of their menstrual cycle. The way this was tested was by analyzing the tips received by female strippers during different times in their cycle. The data were published in Evolution and Human Behavior Volume 28, Issue 6 , Pages 375-381, November 2007.

$335 per shift while ovulating

$260 per shift during the luteal phase after ovulation

$185 per shift while menstruating

(by the way, these were five hour shifts )

One other idea I wanted to touch on briefly was the discussion of menopause. This is indeed fairly unique to humans, however it is difficult to assess whether this is an adaptive response to anything or if it just happens without any direct rationale and has only become apparent in recent human history because of increasingly long lifespans. A recent article about whales might point to Diamond having something here though. It turns out that these are only three (?) species known to go through menopause. These are humans and two species of whales, including the killer whales. Last year, a fantastic study came out showing the importance of post-menopausal females in pods of these whales as evidenced by longer lifespans of male whales with surviving mothers. I encourage you to check out this article here. 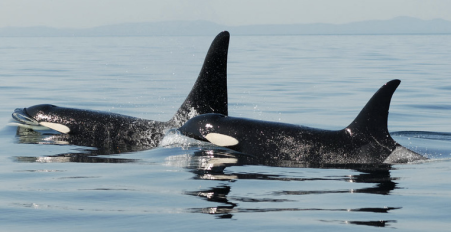 Posted by downhousesoftware on January 10, 2013 in Uncategorized