Milk isn’t just for Oreo cookies – although there’s really no better pairing. In fact, there’s been some recent work showing that rats become addicted to Oreo cookies in a way that is very similar to that seen when rats are given cocaine. If you’ve had oreos, you know that this is really no surprise now, is it?

“What that indicates,” Schroeder says, “is that, perhaps, high-fat, high-sugar foods are stimulating the brains in the same way as drugs of abuse and can be considered as a potentially addictive substance.”

-James Hamblin, How Oreos work like Cocaine. The Atlantic Magazine 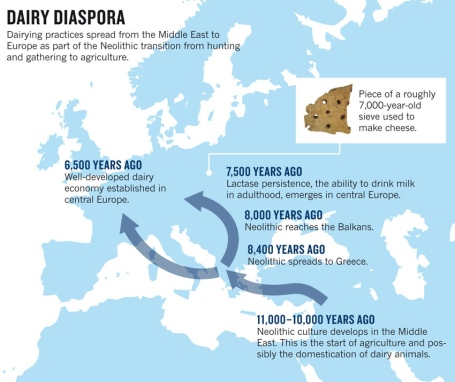 But there’s something that makes Oreos even more perfect: Milk. But drinking milk is for babies – or at least it was. About 7,500 years ago people started drinking milk as adults. However, this wasn’t just a change in preference, it was a change in biology that allowed some people to tolerate milk as adults. It’s easy to imagine how this could help a family survive lean times: One family gets to hungry that they are forced to eat their animals, but another finds that they, unlike their neighbors – or anyone else, can drink the milk of their animals. These lucky people have chanced upon a mutation permitting the lactase enzyme to persist into adulthood and can now outlast their neighbors who were forced to eat their animals and hope that times changed before they ran out of food again.

Consider this video by HHMI’s Biointeractive on how lactose tolerance can be selected for and grow more common in a population over time.

Posted by downhousesoftware on November 14, 2013 in Uncategorized