Why is this the image the public has of biotech?

The biotech revolution can easily be traced even before the publication of Watson and Crick’s landmark Nature paper describing the structure of DNA with clear tracings to Avery, McCarty and MacLeod; Hershey and Chase; Frederick Griffith and others. However, it has become a simple shorthand to start the journey with these two working in the Cavendish Laboratories in Cambridge, England. Their remarkable tale is somewhat like the silicon valley stories of massive industries sprouting up from the garages of Jobs and Wozniak, Gates or Hewlett and Packard. Almost without a detectable ember, a sudden fire erupts changing the landscape of the world.

DNA is a double helix composed of anti-parallel strands of chemically simple nucleic acids joined by millions of low energy hydrogen bonds – two between Adenine (A) and Thymine (T), three between Cytosine (C) and Guanine (G).

Way to lock in a second paper

With this last sentence before their acknowledgements, they make a very reasonable and supremely important speculation about the mechanism of replication indicating that the race was far from over. Rather than being the finish line, this paper was only the beginning of a wealth of information to be gleaned about the mechanisms by which DNA is actually used to carry information and direct the construction of RNAs and Proteins that translate this information into action.

Twenty years later work by Paul Berg, Herbert W. Boyer, and Stanley N. Cohen, to actually manipulate DNA, moving genes from one organism’s genome to another’s, marked another giant step. Their work with the Endonuclease (enzyme that cuts DNA internally), EcoRI, provided the first major tool for the biotech industry. This enzyme allowed researchers to cut DNA at a very specific place (at the sequence, GAATTC) and in a very specific way (leaving overhanging ends that could later be re-annealled with other DNA fragments cut by the same enzyme).

The advent of this technology accelerated research greatly as labs could now isolate and control for the actions of single genes and therefore greatly refine their ability to craft clean experiments to study the effects of these genes.

Today there are dozens of these enzymes (New England Biolabs (NEB) sells 276 different enzymes), known as restriction enzymes, that can be used to specifically cut and paste DNA with precision.  Below is a map of a common plasmid (a small piece of circular DNA that bacteria can easily take up and replicate). Each possible cut site is labelled with the enzyme that can cleave the DNA at that location. Shown are only the enzymes that NEB sells.

A restriction map of the plasmid, pBR322

The only thing lacking was a method for specifically amplifying single genes from an organism’s DNA. This could be done, but the process was laborious and time consuming. Enter Kary Mullis (you might recognize the name from the OJ simpson trial in the 1990s if you are over a certain age). He was a biochemist and computer programmer working for Cetus Corporation when he had an epiphany while driving down the road, stopped and quickly mapped out an idea to amplify DNA using temperature cycling and a special enzyme cocktail that would later earn him a Nobel Prize.

The combination of his biotech background and the ability to think in the loops of a programmer enabled him to see the method illustrated below, which he called a Polymerase Chain Reaction (PCR). This used small DNA ‘primers’ that could be synthesized in high numbers in the laboratory, to specifically bracket an expanse of DNA. Cycling the temperature of the reaction stood in for the enzymatic zipping and unzipping of DNA that permitted these primers to bind to their target sequences. Then adding a polymerase enzyme and free nucleotides, provided all that was required to do in vitro DNA replication that was repeated several times (typically 20-40x) to exponentially amplify only the specific target sequence of DNA so that it could be isolated on a gel and manipulated. 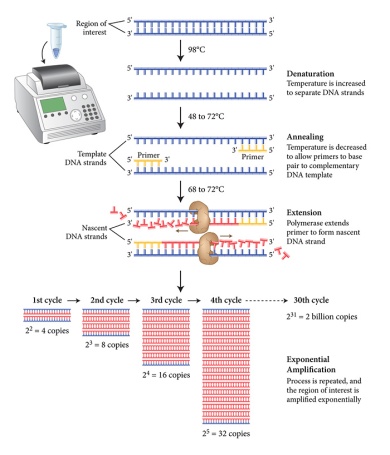 PCR amplification of a target gene

Gel electrophoresis – separation of DNA by size. Here DNA ‘ladders’ are run on lanes 1 and 6 to indicate the size of the DNA fragments, lane 5 is a negative control and lanes 2-4 are PCR amplifications of a specific gene.

DNA fragments run on an agarose gel can be easily isolated (by cutting them free from the gel and chemically purifying them) and used in any of a number of downstream processes such as cutting them and pasting them into another organism’s genome (or more commonly, into another plasmid where they can be moved from organism to organism.)

Applications of this technology include the ‘cloning’ of human insulin from human DNA and moving it into a organism like yeast or bacteria, where these genes can be turned into protein for human use.

This allows for the high-yeild production of these specifically human proteins in a laboratory setting, rather than the old way of bleeding pigs and isolating porcine insulin for use in humans.

Of course, Recombinant DNA technology is like any other technology. A knife can be used to slice bread or as a weapon against another human being. However, it does seem awfully unfair to jump from medicinal uses to ‘The little shop of horrors’ in one leap while condemning everyone who has anything to do with the work along the way.

Posted by downhousesoftware on November 20, 2013 in Uncategorized