RSS
← One snake or two?
Cell Parts and their functions →

Numbers – and Other Obfuscations (corrected) 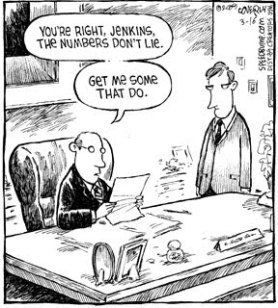 I’m afraid this is going to be something of an incomplete post.

Yesterday, on the local NPR station, several Kansas State Legislators were questioned about plans for this new year. One question that did elicit some discussion concerned the State Education Budget. Here in Kansas, there is some debate about the budget (not unlike the rest of the country). One specific item was how the state was budgeting for education. Currently, there is a dispute where schools are challenging the legislators in the courts over insufficient budgeting.

This is a big mess because now the Judicial branch is hearing a challenge about financial matters that are clearly within the jurisdiction of the Legislative branch – but this is not what interested me.

My interest was piqued when one Legislators were asked about whether they felt that the school budget was sufficient or not to meet educational standards. One Kansas Congressman (I don’t know who because information regarding this show is not yet available online) responded that Kansas is among the top 4 states in funding education. He then quickly added that this was based on the percentage of total State Budget going to Education.

In graduate school, a statement like this would bring a conversation to a halt. ‘What does that mean?’, ‘Is percentage of state budget an appropriate way to gauge spending?’, ‘what does it translate to in absolute numbers?’, ‘What is the best way to measure education spending?’, ‘How can we compare this to other states / countries?’, ‘Are these comparisons important? i.e. does spending correlate to results?’

I could go on for some time on just this question.

The only thing to do is to go find the real answers, which might lead into muddy water. What numbers should we even look for? I think the best place to start is to consider what the standard is for comparison between schools in terms of budget. The most common and apparently sensible answer to this is to look at spending per pupil. This should normalize other variables fairly well – who cares what the actual state budget is? I don’t even care what the educational budget is. If we were going to ask what dollar amount is sufficient to feed a school full of students, we would want to know whether we are feeding 1000 kids or just 10. Admittedly, there are economies of scale, but at least this gets us somewhere.

I got my numbers from National Center for Education Statistics. Also note that the data I found were from 2010, so a little ways back, but necessary if we want to make any comparisons. Using this site’s data, we can immediately see that Kansas ranks 26th of the 50 states in terms of spending per pupil. This is not exactly top 4, but that’s not to say the legislator was lying, just using numbers to his advantage.

Does it matter how much we spend on education? To answer that, we have to look for some data on school performance, grouped by state, from 2010. Luckily, there is a Pew-funded study that does just this giving us a fairly simple number grade from 1-100 (100 being best). I’m not sure if this is the best way to do this, but for a back-of-the-envelope it’ll suffice.

Using these data together, I grouped the states in order of spending per pupil and graphed that against the state’s grade provided by the Pew report. This gave a pretty predictable looking graph.

I had hoped to see something definitive, but despite the trend, the line these data make, gives an r-square value of 0.2. This is the number that tells us how predictive our line will be in the future as well as how well it accounts for the data presented.

This raises the question of whether we should have confidence in the line or not. In this case, r2 = 0.2 means that this line accounts for only  20% of the data. We would like to see this number as close as possible to 1.0, the number indicating that the line fits 100% of the data points and we should be confident of its predictive power.

Here, I have to admit that I am not a dyed in the wool numbers guy. I wish I was, but my faculty with math is weakening with each passing year since my undergraduate studies. I’m going to have to do some investigating into what we can interpret from these data. The trend is clear, the significance of this trend is not.

(Note – this post was corrected, I initially posted it with an incorrect conclusion due to late night foggy thinking)

Posted by downhousesoftware on January 7, 2014 in Uncategorized

← One snake or two?
Cell Parts and their functions →