RSS
← Creativity and Regression to the Norm
Pathways → 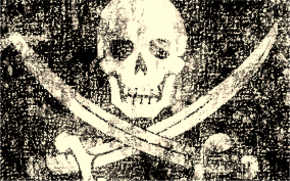 It may seem ironic that people get Scurvy, but dogs do not. Scurvy, of course is vitamin C deficiency, that we associate with pirates and other men of the sea because their seafood diets provide little, if any, vitamin C. As they stay longer and longer at sea, fresh fruits run out and eventually signs of scurvy present themselves.

The cause of this disease is discussed in chapter two of Jerry Coyne’s Why Evolution is True, which we will be discussing in Tuesday’s ‘Ecology’ class.

We’re not alone though. Many animals lack the ability to synthesize vitamin C due to the loss of a single enzyme, L-gulono-γ-lactone oxidase (GLO), responsible for converting L-gulono-γ-lactone into ascorbic acid, also known as vitamin C. Many primates lack this gene – or, rather, we have it, but it doesn’t work. This happens often when a gene that was necessary to our ancestor’s survival becomes unnecessary to our own. There are a number of examples of this in our genome, because we can still find the genes sitting like so many unused, derelict ships, we identify them as pseudo genes.

Pseudo genes may be considered nature’s unemptied trash can, filled with the remnants of old or abandoned projects. This occurs because natural selection keeps the pressure to maintain useful genes, but does not act as strongly – or at all- on those that provide little benefit.

In our own family tree some early primate started including enough fruit in its diet that making its own vitamin C was so inconsequential that when they had babies that couldn’t make it themselves, no one noticed. And, more importantly, that baby was just as healthy as any other.

When that happens, mutations pile up over time that continue to degrade this gene at, what we assume is a uniform rate. The last part of that is difficult to demonstrate directly, but if true, it gives us a yardstick to measure how far back in time the initial mutation occurred. It is estimated that this mutation occurred about 61 million years ago in our ancestor.1

This was long enough ago that not only do humans lack this ability, but a number of other related primates lack it as well, including gorillas, gibbons and macaques.2

Another animal lacking the GLO gene is the guinea pig, which lost its ability to make vitamin C only recently (as evidenced by the animal’s close relatives – rats and mice – retaining functional copies of GLO. A comparison of the functional rat protein with that predicted from the remains of the gene in guinea pigs show only three small sections missing from the guinea pig protein, while no effective (>30% similarity) alignment with a human sequence occurs due to the degree of gene degradation. 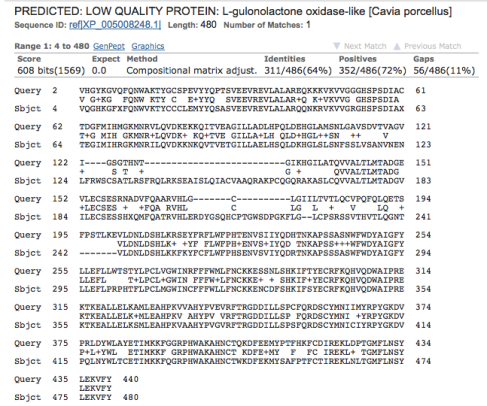 The rat and canine alignment quite clearly shows that the whole functional gene remains in dogs:

However, if you want to insist that dogs can get scurvy, head to the Pirate Shop at Ye Scurvy Dog to load up on pirate merchandise.

Posted by downhousesoftware on January 26, 2014 in Uncategorized

← Creativity and Regression to the Norm
Pathways →