Tomorrow in class, where we have recently been discussing Mendelian Genetics and its twisted perversion,Eugenics; we will be watching the dystopian film, GATTACA. The story is good enough, but what I find compelling is the way that society has become the way it is. The population has been recently ‘improved’ by the production (?) of ‘designer babies‘. The method seems very much like one that I can honestly imagine working its way into present society. These children aren’t fabricated, they’re yours. Only – just the best parts of you.

Society fell for Eugenics once – and not just Hitler. I know that’s where your mind is going. But there were plenty of Eugenics believers here in the USA as well. Just ask this happy family:

It was a time when Mendelian genetics was coming to be understood in principle by a wider audience following the work’s ‘rediscovery’ by Hugo de Vries and Carl Correns in 1900. The main idea behind Eugenics was that better people could be made through selective breeding of only the right kinds of folks. The term Eugenics was coined by Sir Frances Galton, who actually a great thinker contributing several key ideas in the field of statistics and inventing the sciences of meteorology and psychometrics. His books, Hereditary Genius (1869) and Essays on Eugenics (1909) lay the groundwork for thinking about which traits are inherited and which are learned in humans. In exploring the idea of hereditary greatness, he also explores the hereditary of less desirable genes.

What he concluded was that great, geniuses like himself simply aren’t having enough children while the lowly dregs of humanity were breeding like bunnies. Well, there’s a couple of ways to put an end to that nonsense.

Here is an excerpt from a Scientific American editorial of the time (1911) lauding Galton’s ideas:

ADA JUKE is known to anthropologists as the “mother of criminals.” From her there were directly descended one thousand two hundred persons. Of these, one thousand were criminals, paupers, inebriates, insane, or on the streets. That heritage of crime, disease, inefficiency and immorality cost the State of New York about a million and a quarter dollars for maintenance directly. What the indirect loss was in property stolen, in injury to life and limb, no one can estimate.

Suppose that Ada Juke or her immediate children had been prevented from perpetuating the Juke family. Not only would the State have been spared the necessity of supporting one thousand defective persons, morally and physically incapable of performing the functions of citizenship, but American manhood would have been considerably better off, and society would have been free from one taint at least.

The Free Kansas Fair of 1927 had more than just pretty families. It also proposed just how even prettier families could show up in the years to come: 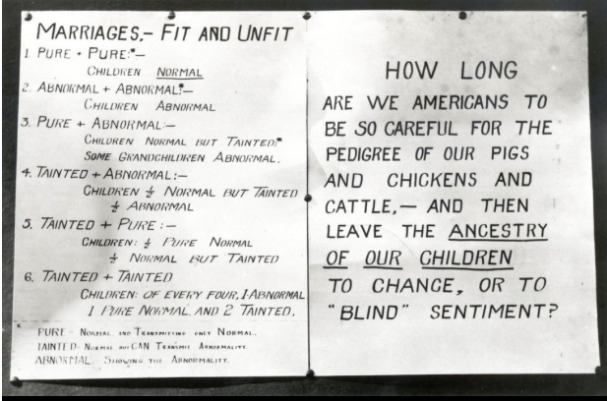 Why is Blind in quotes? Is that, perhaps, a suggestion? Or is it just poor grammar?

Do you suppose ‘Pauperism’ is dominant or recessive? Either way, it’s bad. How can they go around having no money like that? Have they no shame?

Posted by downhousesoftware on April 23, 2014 in Uncategorized

← Science on Screen
A Pointer to My Post After Watching GATTACA →

2 responses to “Eugenics in film: GATTACA”