As always, my Microbiology class is reading Paul Offit’s Vaccinated this year. Recently, we have started into the chapters concerning Hilleman’s involvement in making vaccines against Measles, Mumps, and Rubella, each taking a chapter in the book.

Rubella is often overlooked as an unimportant disease with milder symptoms than other vaccine-preventable illnesses such as Measles, Smallpox, or Polio. However, Rubella represents a different threat, less visible during the acute phase of infection.

From the Latin, Rubor, meaning red. Rubella (little red) was initially identified by its similarity to measles, resulting in a shorter-duration (aka 3-Day Measles) episode of red spots. Because of the similarity to Measles and being first described by a number of German scientists, Rubella took a third name, German Measles.

Although Rubella is not typically a dangerous disease for older children, it can be difficult for babies and is particularly destructive when contracted by women in the first trimester of pregnancy. Early in the pregnancy rubella infection can lead to serious problems in approximately 50% of babies. So common are these outcomes that they bear their own name, Congenital Rubella Syndrome (CRS). Effects include blindness, deafness, congenital heart disease, and intellectual disabilities.

Following this epidemic, a vaccine against Rubella was approved for use in the US in 1969 and was followed by an abrupt decline in the number of cases as seen in this graph illustrating the number of rubella cases occurring in the US from 1966-1993. (taken from Centers for Disease Control and Prevention Summary of notifable diseases—United States, 1993 Published October 21, 1994 for Morbidity and Mortality Weekly Report 1993) Although not depicted in this graph, the resulting CRS incidence followed a similar pattern.

Until recently, the most common mechanism for vaccinating against Rubella was the Measles/Mumps/Rubella (MMR) combination vaccine. However, in 2004 a MMRV combination containing varicella (chickenpox virus) was approved adding additional protection to the single shot. Currently, the MMR/MMRV vaccine is recommended at age 12-14 months, with a booster at age 4-6.

When the MMR vaccine came under suspicion following the 1998 publication of Andrew Wakefield’s notorious (and now retracted) article suggesting a link between vaccination and autism, Measles cases began to re-emerge.

Concurrently, Rubella cases have also rebounded in countries that had previously nearly eliminated the disease (see data below from Poland).

Ultimately, the future for these viruses depends on how we, the public choose to use the information available to us – and where we choose to get that information, from talk show hosts and celebrities, or from the agencies we have built to protect the health of the country.

Posted by downhousesoftware on September 29, 2014 in Uncategorized

I’ve been locked away in jury duty for the past 1.5 weeks. All the while falling behind in each of my classes and feeling like the case was never going to end. Today, however, after many hours of deliberating, we finally turned in a verdict and got released from our service.

In General Biology class we have several chapters of Your Inner Fish to talk about as a nice segue from this impromptu break back into study. In the text, we will tackle the flow of energy through biological systems. In the simplest terms, this asks the question, “How do biological systems capture energy from their environment and use it for their own purposes?” This includes two basic pathways, Photosynthesis and Cell Respiration. What’s amazing is how similar these two processes are – each involves a cycle of reactions and each involves an ‘electron transport chain’. The electron transport parts of these pathways tie together some of the topics we covered earlier this semester regarding membranes, enzymes and diffusion.

In Microbiology, we will consider a couple of chapters from Offit’s Vaccinated and hopefully tie this in to an introduction to Virology. Key to this is an understanding of how viruses are put together, how they operate in getting into cells and how they can then co-opt cellular processes. The simplest way this is done is to direct systems to creating more virus particles, however, some viruses, like HPV do more to affect cell cycle and thereby not just produce more virus, but also initiate a cascade of events that may lead to cancer of the infected cells.

It’s good to be back.

Posted by downhousesoftware on September 24, 2014 in Uncategorized

1. NaNoWriMo draws near. Pull yourself together and commit to writing a novel in 30 days along with thousands of others worldwide. There are still forty days to sign up, so head over to their site and check it out.

2. My wife has been away this week on business and our indoor cat is busy expressing his discontent under the piano. So far Penny has not joined in.

Posted by downhousesoftware on September 18, 2014 in Uncategorized

Today is the first day of the Coursera Cyrptography class taught by Stanford Professor, Dan Boneh. I follow courses like this every once in a while in order to learn a bit about topics that I would not otherwise get any exposure to. Boneh’s course is a little math-intense, but there is another more concept-driven course on the same topic being offered on Khan Academy. If you haven’t taken advantage of either of these two sites, you should look into them. Both are entirely free, and both are taught by excellent educators.

Here’s a video from the Khan Academy site introducing the Caesar Cipher, a simple cipher like those used on radio dramas of the past (get your secret decoder ring!).

If you want to crack a simple substitution cipher like this, you might want to start by using a frequency chart of letters used in the English language, like this one: 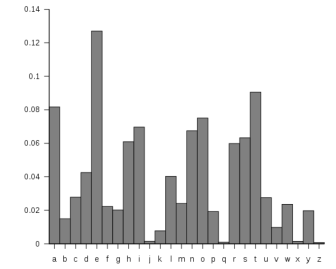 However, once you figure out the easiest letters (e,t,and a), things get a bit more difficult. At this point, you will probably have to start looking at letter pairings (Bigrams) to see if any useful patterns show up there. Here’s a listing of the most common Bigrams (again, in English). 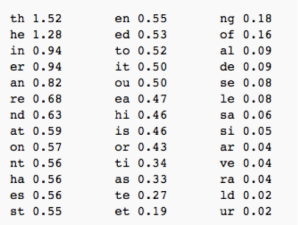 It’s interesting that these kinds of codes might ever have been considered sophisticated enough to use in the real world. After all, it’s easy to find examples of these types of ciphers in daily newspapers around the world presented as cryptograms that people do for fun.

Posted by downhousesoftware on September 8, 2014 in Education

These are the men who were a heartbeat from the presidency  1989 – present.

Posted by downhousesoftware on September 3, 2014 in Uncategorized

for a hint on this week’s quiz… 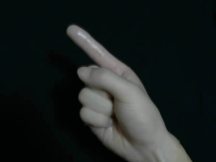 Posted by downhousesoftware on September 1, 2014 in Uncategorized