One of the more interesting cases of oddball genetics can be found by the banks of Kentucky’s Troublesome Creek. Some of the families these exhibit a hereditary condition known as methemoglobinemia which makes their skin appear a deep blue. E. M. Scott reported cases of this condition in his 1960 article in the Journal of Clinical Investigation (vol. 39, 1960).Scott found that “In normal people hemoglobin is converted to methemoglobin at a very slow rate. If this conversion continued, all the body’s hemoglobin would eventually be rendered useless. Normally diaphorase converts methemoglobin back to hemoglobin.” However, in people lacking the enzyme, diaphorase, hemoglobin is converted into methemoglobin and cannot be converted back resulting in a general blue coloration. 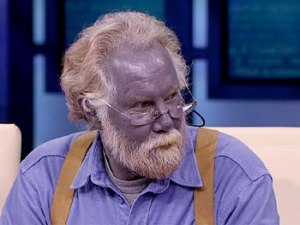 The condition is extraordinarily rare, and typically is seen only in inbred families. Given the pedigree below, suggest a pattern of inheritance that this condition may be exhibiting.

One thing you may notice from the beginning is that Zachariah Fugate is married to, and has children by his mother’s sister (that’s the odd looking relationship outlined in the top two rows). This consanguineous relationship is further illustrated by the double line between Zachariah and his (un-named) wife.

Once you’ve taken a stab at determining the inheritance of this trait, take a look at the excellent write-up of this condition here.

Posted by downhousesoftware on November 11, 2014 in Uncategorized