The value of life

value is what we make it

Episode 3 / Season 13 of WNYC’s Radiolab asks, “What is the value of human life?” in a story titled, Worth.

This article questions how much life is actually worth to us. On the street, they put the question to passers-by in the form of, “What would one year of healthy, productive life be worth to you?”

Answers ranged from the ridiculously small ($5 – surely life is worth more than a Venti Frappacuinno at Starbucks) to the absurdly high ($10,000,000 – perhaps it would we worth that to someone with a net worth in the billions, but probably not for the average person.

Is a year worth the salary you make in a year? Apparently non-working spouses (or young children) are worth zero.

Is it the same value for every person? Is a year of my life worth as much as that of a fortune 500 CEO’s. The President? A Nobel Prize winner? A crack dealer?

END_OF_DOCUMENT_TOKEN_TO_BE_REPLACED

Posted by downhousesoftware on December 29, 2014 in Uncategorized

So begins the serial podcast – a spinoff from This American Life featuring Sarah Koenig researching, editing and performing long form journalism which she and her staff have spent a year investigating.

Adnan Syed has been serving a life sentence for the murder of his former girlfriend, Hae.

The podcast succeeds in several ways: It is the gripping product of intense investigation and reflection; It questions what it is to be accused and sentenced (without ever fully committing to whether this is sentence is correct or not); and it illustrates how the prosecution of minor offences by the police and fundamental religious values within a family can lead to unpredictable and undesirable ends.

First, the purpose of serial is to present one single story from beginning to end over the course of a full ‘season’. In doing this, much more time is spent on a single question than almost any other form of journalism. Each week focuses on a different element of the story from the history of the case, interviews with the witnesses who were called (and some not called) in the case, an exhaustive exploration of cellphone records, and even one episode devoted entirely to the inconsistencies of the case.

Second, it asks what is it to be accused and convicted of a crime that you did not commit (giving Mr. Syed the benefit of the doubt in this question)? What does it do to a life? How much or how little evidence is needed to convict? What factors (other than the facts of a case) may play into a jury’s decision? 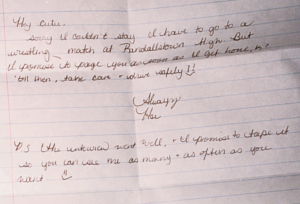 A note from the victim, written just before the crime.

Mr. Syed speaks about how it hurts to have lost the trust of his friends and community. He explains how he has never known independence in his life after leaving school to go directly to jail. He discusses his experience in jail – how it was or was not as he expected, what he does all day, and how he maintains relationships with those on the outside.

Thirdly, it is plain (to me) that much of the trouble that the different players of this story get into is due to their initial unwillingness to expose relatively minor illicit dealings to the police or to keep parents in the dark with respect to relationships outside of their own cultural group (Mr. Syed is of Pakistani Muslim descent and his family has prohibited him from dating girls outside of this religious community.

And, lastly, on a more personal level, this story brings memories of a case in which I sat on the jury for earlier this year. Was our judgment correct? Were we biased against the defendant? Did we have sufficient information to make the decision we made? It was painful to weigh the lack of ‘hard’ evidence against an abundance of ‘circumstantial’ evidence. Yet we were instructed by the court to consider both types of evidence as equivalent (an instruction that literally wound up settling our decision more than any other single fact).

How would I feel if I was the one on trial? Wouldn’t I be irate if I learned that I had been convicted on the basis of such a simple instruction? Is justice really blind? Was this instruction about evidence reasonable?

All during the trial, it was plain to the jury that it was the incompetence of the defendant’s lawyer that really made the case for the prosecution. Would he have been convicted if he had a better lawyer?

I’ve been mulling over all of these questions – bouncing from the case of Adnan Syed, to the one I served on. For all this, I think Serial has been incredibly successful.

Posted by downhousesoftware on December 19, 2014 in Uncategorized

Frost in the low areas

An old friend of mine, Karen Skolfield, is presently living my dream of being a successful author in New England (I grumble inside as I note that I am not successful, an author, or living in New England – but they would all be nice) writing poetry. Her book, Frost in the low areas, has earned her the 2014 PEN New England Award in poetry, the First Book Award from Zone 3 Press, the 2014 Split This Rock poetry prize, and the 2012 Oboh Prize from Boxcar Poetry Review.

I’ve known Karen for almost thirty years now, first meeting when she was an upper classman in the Latin I class I took as a freshman in high school. She sat near the door with the other juniors and seniors, while David Onuschak and I, along with the other freshman, sat clear on the other side of the room sincerely translating “Magnus puellas aqua portent” into “Big girls water gates” – word order is everything and nothing in Latin.

The next year, in Latin II, I became seriously smitten by her and spent a good number of hours trying to casually ride my bike in front of her house in case she happened to step outside and have a ‘chance meeting’. She wouldn’t know this because chance never favored me, or perhaps it was just sparing me the embarrassment of having to explain why I was riding past so often on a dead-end street.

— Passage of vast amounts of time —

Some 28 years later, I found Karen through common friends on Facebook, and I’ve been delighted to reconnect. Recently, she launched her new website karenskolfield.com where you can read about her, her work, and follow her blog. She’s looking for readers (of both her blog and book) and would love to spread the word about her site, so please check it out, provide some links to it and perhaps even buy her book. Let’s not let her fear the audience of one again.

Posted by downhousesoftware on December 19, 2014 in Uncategorized

The Shape of Things

The End is near.

Only Final Exams are left this semester and they come on Tuesday for both classes between 9am and 3pm. Students are welcome to come in any time in the window, but are encouraged to start at either 9am or 12pm. If you expect to come at a significantly different time, please email me.(

Regarding the topics covered…

For each class, it is your responsibility to know anything we have covered. However…. I am strongly biasing the exams toward the most recent material which I believe encapsulate ideas taught throughout the semester.

How things are now:

Begins with ten questions that are directly based in Unit I. This may include chemistry, membrane biology, cellular anatomy (Prokaryotic and Eukaryotic), Enzymes and Energy, Photosynthesis, Cell Respiration, and Cell Division. (Special emphasis is placed on bold topics)

The Bulk of the exam consists of questions on Mendelian Genetics, the Chromosomal and Molecular bases of Genetics and the application of this knowledge in problem solving. It is vital to have a good grasp of notations for following autosomal and sex-linked traits through family pedigrees and be comfortable with monohybrid and dihybrid crosses.

Begins with just five questions that are directed based in Unit I. Each of these regards the larger ideas we spoke about in those chapters and which could be said to define biology / microbiology.

I also expect you to understand the structure of operons (specifically the lac operon). I can’t remember if this was covered in Unit I or II, but regardless, it is something you should know. 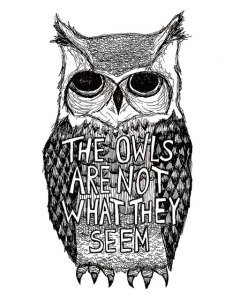 visit https://www.etsy.com/listing/82653188/the-owls-are-not-what-they-seem for a copy of this print

And don’t forget that I’m pretty transparent about the kind of extra credit questions I ask: One brand is deeper knowledge or application of the core material. One brand is based upon recurring themes of pseudo-randomness.

“Extra credit is not what it seems”

Posted by downhousesoftware on December 5, 2014 in Uncategorized

A very quick post inviting all my students to propose questions for the final exam. This is your opportunity to put a question on the exam that you are positive you know. No promises, but I would like to see good quality questions (with answers) posted in the comments section below.

Posted by downhousesoftware on December 4, 2014 in Uncategorized