RSS
← Getting a Handle on Blood Pressure
The time has come… →

Some of these data came as a surprise to me

According to a new poll by YouGov, an online opinion tracking site, millennials –  more than any other generation – believe that there is (probably or definitely) a link between vaccines and autism. See the raw data here.

If I were asked this question on a bet, I would have put my money on the 30-44 year old generation. My rationale is that this is the generation that is most likely to have had children born around the time that the Wakefield paper and its fallout hit the national / international news. Since this is an issue that would attract new parents’ attention preferentially, I thought that they would remain the most vulnerable to this wave of misinformation.

Further, as people in the poll get older, they are more likely to have personal memories of people they know who suffered from what we now consider ‘vaccine-preventable illnesses.’ Again, my assumption would be that they saw first-hand how the disease landscape of this country has changed in the last century and would have been less willing to dismiss the value of vaccination. – It’s a lot easier to miss something that’s not there. 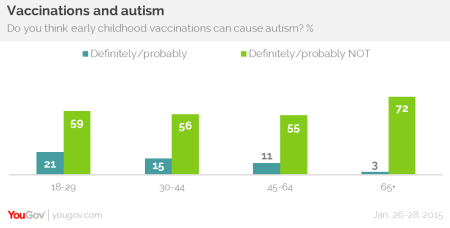 Overall, the trend does hold that older people put less credence in the Wakefield hypothesis. I’m just shocked that the trend continues into the youngest generation.

Unfortunately, this is the same group that is most likely to be having kids today, which might explain the continued incidence of philosophical abstinences from vaccination.

Posted by downhousesoftware on February 2, 2015 in Uncategorized

← Getting a Handle on Blood Pressure
The time has come… →