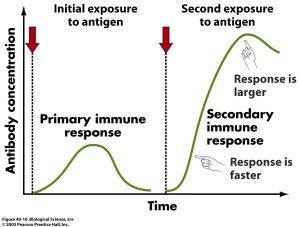 There’s more than one reason to immunize your kids.

Even if just not getting measles was all you got for your immunization, it would still be worth it. But through some unknown mechanism, getting measles seems to erase prior immunological memory, by depleting B and T lymphocytes (so, we know the cause, but not how this happens).

Below, is a visualization of individuals’ lymphocyte numbers pre and post measles:

Apparently, naive cells are either not impacted, or only minimally so. Whereas all specific lymphocytes are completely depleted. Following resolution of the infection, the only antigen-specific lymphocytes that remain afterwards are those specific to measles. That is, you now have the immune system of a toddler, with the sole exception of having immunity to measles. Recovering that lost immunity takes approximately 2-3 years of being exposed to and contracting infection after infection to rebuild memory.

Posted by downhousesoftware on June 3, 2015 in Uncategorized

← Feeling Important? This’ll take you down a notch
EKG Basics →