I think I misspoke in class the other day. I’m not positive, but I may have used the term Oligouria incorrectly.

Regardless of what I may have said, I want to clarify here…

Oligiouria is the condition of producing small amounts of urine. Oligo- meaning ‘small, little’ + -uria, from the Gr. Ouron = urine. Clinically, oligouria is defined as the production of 100-400 ml of urine per day as opposed to the typical 400 to 2,000 mL — from about 2 liters of fluid intake.

Decreased urine production can be caused by a number of conditions, but most commonly, it is an indicator of dehydration or hypovolemic shock, which may also sequelae of  a variety of things. Hiking in the desert without water can do it, but so can kidney failure or a blockage – both of which can occur even with adequate hydration.

The other end of the spectrum is Polyuria, or the production of excessive urine ~more than 2.5 Liters over the course of a 24 hr day. This is essentially equivalent to Diuresis which is from the Gr. Diourein, meaning ‘to urinate’. 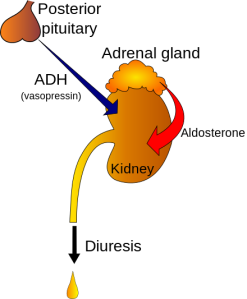 Posted by downhousesoftware on June 18, 2015 in Uncategorized

One response to “Etymology: Oligouria”