RSS
← Stephen King’s Carrie and the problem of genetics in an horror story
CRISPR: Accelerating the pace of molecular biology →

A rose by any other name…
My wife says that I tend to sulk when I feel mistreated.
Fortunately, I was able to correct her: Cool guys don’t sulk, they brood.

You know… because sulking is a bad thing that spoiled kids do when things don’t go their way or they don’t get what they want. And brooding is just being withdrawn from a world that doesn’t understand you (and it might even look a little like being bored, because the world bores you when you’re cool)

I was listening to the Stuff You Should Know podcast today about Road Rage, the phenomenon that hit the streets of LA and other big cities in the late eighties and into the nineties. At the time, road rage was making waves because of a spate of freeway shootings on highways in and around LA.

Today we call it aggressive driving and pretty much expect it from everyone (minus the shootings).

from the stuff you should know podcast:
http://www.stuffyoushouldknow.com/podcasts/road-rage-grrrr/

What I especially enjoyed was the suggestion that the best remedy to instances of rage was quiet contemplation (which was jokingly referred toin the 70s offered as the best solution for dealing with anger.

It made me wonder, what is the best response to anger and frustration? Catharsis? or meditation? Do we do ourselves harm by ‘burying it all down inside?’ or does letting it out simply condition us to being openly angry?

Dr. Arthur Janov, in Why You Get Sick – How You Get Well,  was a proponent of releasing anger so that it doesn’t eat you 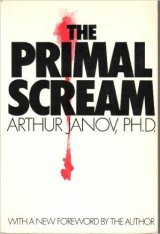 up inside. He suggested that

“Repressed pain divides the self in two and each side wars with the other. One is the real self, loaded with needs and pain that are submerged; the other is the unreal self that attempts to deal with the outside world by trying to fulfill unmet needs with neurotic habits or behaviors such as obsessions or addictions. The split of the self is the essence of neurosis and neurosis can kill.”

The cure for this repression was to let it out in ‘Primal Scream Therapy’  that released the pain and allowed a person to become whole again.

[The Primal Therapy Website]  website
In 1998, a new trend in anger management philosophy entered the ring as Jill Littrell published an article, IS THE REEXPERIENCE OF PAINFUL EMOTION THERAPEUTIC (Clinical Psychology Review Volume 18, Issue 1, January 1998, Pages 71–102)?, suggesting that re-experiencing powerfully emotional memories can be therapeutic, but only in the controlled situation of psychotherapy designed to re-cast these experiences in a better light. That is, the value is not in catharsis, but in cultivating a less traumatic neural network that is called when remembering an experience.

To address the question, Bushman, Phillips and Baumeister write in a 2001 article in the Journal of Personality and Social Psychology (http://www-personal.umich.edu/~bbushman/bbp01.pdf) that their data supports the idea that aggressive people do engage in ‘anger-out’ expression in the hope that it will improve their mood (if they were told they were given a drug that would ‘freeze’ their mood, they tended to abandon their ‘let it out’ strategy.

However, the same study found no evidence that this method actually worked to reduce anger.
The next year, followup work by Bushman, at Iowa State University looked at the effect of 1) Letting it out, 2) Holding it in (ruminating), or 3) Distracting oneself from the issue in reducing anger and aggression. It is interesting to note that both holding it in and letting it out resulted in poor outcomes, only distracting one’s self from the issue effectively reduced anger and aggression.

… not brooding or letting it out in a scream.  Maybe just wearing a sombrero will do.

Posted by downhousesoftware on July 26, 2015 in Uncategorized

← Stephen King’s Carrie and the problem of genetics in an horror story
CRISPR: Accelerating the pace of molecular biology →