RSS
← My log has something to say…
He’s going on about branding again…. →

I’m going to go out on a limb here:

With the recent discovery of (evidence for) liquid water on the surface of Mars, there’s going to be life there.

My own personal hypothesis would be that it’s either going to be terrestrial life that was transported to Mars via rock ejected from Earth by the impact of past meteors or the other way around, an idea known as panspermia. One solid possibility would be Earth –> Mars via ejecta following the Chicxulub asteroid impact in Mexico. It is commonly thought that Mars may have been a much more hospitable place long ago, including large seas suggested by potassium-thorium-iron enriched areas visible by Gamma Ray Spectrometer. This enrichment may be explained as an accumulation deposited by liquid water on the surface of the planet. 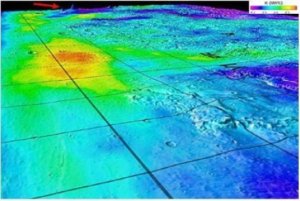 A superimposition of gamma-ray data from Mars Odyssey’s Gamma-Ray Spectrometer onto topographic data from the laser altimeter onboard the Mars Global Surveyor.

If this is correct, some residual bacteria-like organisms remaining from a more biotic history could have seeded Earth in a Chicxulub-like impact of Mars.

“Tetsuya Hara, et al, at Kyoto Sangyo University in Japan have calculated that a large amount of Earth landed on the Moon and Mars, but also on other planets that may be compatible with life—the Jovian moon, Europa, the Saturnian moon, Enceladus, and more surprisingly even planets like Earth orbiting other stars.” (from askwhy)

Regardless of any relationship between the life of the two planets, I have to say that I’m firmly on the side of manifest destiny here. I completely understand the arguments against contaminating another planet with life from this one, but I don’t imagine a future without Earthlings spreading to the other planets of this solar system.

Without the need to transport masses of water, NASA (and other Terrestrial space agencies) may suddenly see a manned mission to Mars as imminently do-able. The question changes from could we go to should we go? What are our obligations if our presence there will disturb an extant biosystem?

Carl Sagan said “no.” It was his belief that any planet with indigenous life should be protected from human intrusion. Perhaps an inspiration for Star Trek’s Prime Directive.

On this issue, I would have to part with Sagan’s advice – perhaps on purely selfish grounds. I want humans to explore the heavens and I believe that a strict policy like this Prime Directive would prevent that forever.

If you are reading this, take a moment contribute your two bits.

If possible, should humans go to and possibly remain, on Mars?

Posted by downhousesoftware on September 29, 2015 in Uncategorized

← My log has something to say…
He’s going on about branding again…. →