Last night was the first film of the new SciFlix Series at KU Edwards Campus and both the film and the discussion afterward were a great success. Alex Williams of Psychology joined Annette Tetmeyer from Electrical Engineering and Computer Sciences and Matt Luetke from the KUMED’s Hanger prosthetics clinic to take questions from the audience on topics of Artificial Intelligence, Big Data, Lack of Empathy, and the state of the art in smart prosthetics.

Robocop, released in 1987, is set mid 21st century in Detroit, Michigan, a city that looked bound for chaos in the 80s as the gasoline crises of the 1970s continued to push consumers away from large American vehicles to smaller, more fuel-efficient imports. 2043 finds Detroit at a crossroads between complete urban decay and a vast privately developed renaissance. The company behind this redevelopment (creating Delta City) is Omni Consumer Products, OCP or OmniCorp for short.

OCP has a history of moving into the public sector taking contracts in managing prisons, hospitals, space exploration, and – notably – the Detroit Police Department. Before committing to the massive undertaking of rebuilding an entire city center, OCP has determined that the thriving criminal elements must be cleared out to make it safe for the ‘millions of workers needed to build Delta City.’ This is truly a massive project considering it took just 10,000 – 12,000 workers to complete the Burj Khalifa in Dubai.

What ‘the old man’ who controls OCP doesn’t know is that the foundation of  this criminal underworld lies directly under his nose with his Senior Vice President, Dick Jones, who uses his power in OCP to manipulate the police department and attorney general’s offices to protect his racketeering.

So it’s not too much of a stretch to say that Detroit is in a bad way. Crime is up. Corruption touches all aspects of public life, and empathy is almost nowhere to be found.

Dr. Williams grasped this problem head on, challenging the public’s misguided perception that crime is on the rise and we are living in an increasingly unsafe world. This perception though is false. In fact, violent crime in the US has been in steady decline since the early 1990s when the ‘crack epidemic’ swept the country.

A student of Dr. Willims put him on the stop asking how he would go about treating Robocop for his evident post-traumatic stress disorder and apparent lack of empathy. Rather than just providing an answer, Dr. Williams provided a framework for understanding his unique patient and presenting a pathway to determining the therapies best suited to one who encompasses the rational mind of a computer and the all to human mind of one who experienced great loss. 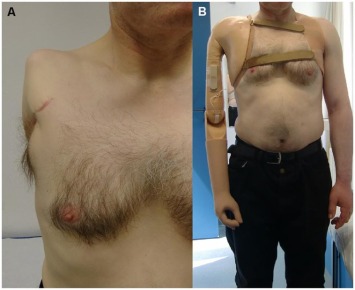 A myoelectric prosthesis implanted after shoulder disarticulation (A) 2-DOFs self-powered hand, wrist, and elbow, plus non-motorized mechanical shoulder with electrical fixation (B).

Questions  to  Mr. Luetke inquired into the capacity for integrating prosthetic devices into or onto the bodies of amputees to restore what was lost or even to upgrade a limb to be stronger than it was before the loss. Mr. Luetke provided a thorough, understandable synopsis of technologies currently in research as well as those available to the public, taking the time to describe how new myoelectric devices can translate muscle movements from restructured nervous pathways to allow for natural control of a full arm prosthesis.

Dr. Tetmeyer received a number of questions regarding artificial intelligence, the singularity (sort of), and the role of algorithms in daily life – the last of these I really wanted to explore more with respect to both Cathy O’Neil‘s Weapons of Math Destruction and the fact that it is now possible to get a motor vehicle violation with photo for going through a stop light in the middle of the night when no one is around. Surprisingly (to me), the interest in computer science was more theoretical than practical and also more positive than I had expected – considering we had all just watched a dystopian film together. The HAL 9000 was mentioned, but more for comparison to current devices like Amazon’s Echo or Apple’s Siri.

The night ended with a raffle with winners taking home KU moleskin notebooks, KU T-Shirts and the Grand Prize, an OmniCorp T-Shirt. We have the Future Under Control.

Posted by downhousesoftware on October 25, 2016 in Uncategorized