RSS
← By any other Name …
Directional Cloning: a quick description →

What was it that made Alien more gripping, more terrifying, less …known than Covenant?

Was it character development?

Perhaps something about the grit of the Nostromo?

Maybe working with a much more limited budget spurred creativity in response to necessity. 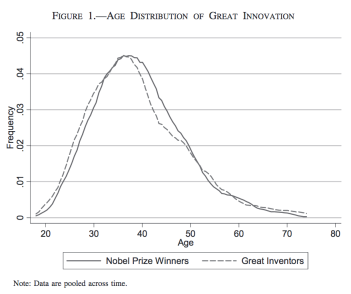 Or maybe it’s just that we do our most creative works when we’re young?

Quite simply, at least in the sciences, if you haven’t contributed a great work to society by age 40, the likelihood of doing so is about to quickly drop. By 60, it’s vanishingly small (first figure).

There’s some adjustment allowed for those who have earned their terminal degree later in life, possibly accounting for many of the late achievers above (second figure).

Artists and writers reach their peaks at about the same time in their lives according to an article by Christopher Ingraham of the Washington Post.

Sir Ridley Scott fits the pattern perfectly. Born in 1937, he was 42 when he made the original Alien in 1979.  Three years later he released his other opus, Blade Runner, and although he continued to make greatly successful films throughout his long career, few have been as widely regarded as groundbreaking.

Screenwriter, Dan O’Bannon was 33 when he wrote the script for Alien; H.R. Giger was also 40 at the time he was producing the art design for the film. For completeness sake, Philip K Dick was 40 when he wrote Do Androids Dream of Electric Sheep, the novel that later became Blade Runner.

So, perhaps it should come as no surprise that Scott’s return (now at 79 years old) to the franchise with Prometheus in 2012 and Covenant in 2017 was unlikely to achieve the success of the original.

Prometheus and Covenant represent prequels meant to explore the origins of the aliens – and – why not explore the origins of all humanoid life? They also continue the cautionary tale of AI being the end of us which started in the original, took a break in the first sequel (apparently, James Cameron doesn’t share Scott’s feelings about technology) only to return with Fassbender’s David & Walter.

Prometheus begins with allusions to a prior race seeding the galaxy (?) with its DNA – a difficult pill to swallow as it suggests an origin of humanity unique from the other life on Earth. This may be fascinating as a science fiction premise, but completely absurd biologically. Nevertheless, the connection to Prometheus, the rogue Titan, makes sense thematically.

Similarly, Covenant begins with speculation about creation as the android, David, awakens to the world in a room that makes the monolith room from 2001 look cluttered with junk. “So, you made me. But who made you?” Deep thoughts, David. Already, David moved from infant to irritating college freshman just out of the first class of intro to philosophy. You can see Weyland already annoyed by his creation, “Play the Piano, David.”

David doesn’t appear scarred in the moment, but obviously, it’s had some effect. Many years later David’s still hung up on being creative and has filled his whole playhouse with sculptures, sketches all over the walls of his creations like a psychotic Leonardo DaVinci, and undoubtedly some angst-ridden poetry amongst his piles of scrolls.

David, the original, is all too human: creative, self-serving, and cruel. Walter, the modern model, is none of these. Walter tells us that David’s individualism scared the humans in charge and they made modifications to prevent these characteristics from emerging in newer models.

“You have symphonies inside you,” David tells Walter while teaching him to play a flute. He can play, but not compose. The whole scene reminds us of Scott’s other masterpiece, BladeRunner, as Rutger Hauer telling Harrison Ford of seeing “… things you people wouldn’t believe. Attack ships on fire off the shoulder of Orion. I watched C-beams glitter in the dark near the Tannhäuser Gate. All those moments will be lost in time, like tears in rain.”

Here we have the director’s real passion. The nature of life. The futility of mortality. We’re even given a recitation of Shelley’s Ozymandias. Only Gather Ye Rosebuds could be plainer in giving us insight into Sir Scott’s mind. After all, are we not looking out over a plain that could easily be the crumbled remains of the King of Kings’ empire? Could it be that Scott is recognizing his age and taking time to reflect on the meaning of it all? Or, is this just an eternal question that he has pondered all his life? The Ozymandias scene is one of the best in the film, despite the similarity to his other work.

“We are food for worms, lads.”

Another improvement is that Walter can heal himself immediately, while David either cannot, or heals slowly, like the humans he is designed to replicate. We’re shown this ability early and it’s obvious later, when it should be much subtler.

As a fan of the franchise, I was going to see this film no matter what, but I also had to come home and watch Alien and Aliens over the next two nights to remember why.

Posted by downhousesoftware on May 30, 2017 in Uncategorized

← By any other Name …
Directional Cloning: a quick description →