Epidemiology: Should farmers try to do more work near noon?

The CDC has a wealth of classroom information (case studies, discussion material) regarding epidemiology. No surprise there. It’s what they do.

In my Microbiology class we’re starting a unit on epidemiology that students are working on in their free time either alone or in groups. We will talk about the project as questions come up, but mostly, I wanted people to have an opportunity to think freely – i.e. without me forcing my own ideas on them.

In my Ecology (population genetics, etc) class, we just spent some time last week discussing how data is just data, and in the absence of a reason to mistrust it, it probably makes sense to assume that the data is correct. However, this leaves the interpretation of the data up for much debate. ‘How so?’ I was asked. ‘Because people run experiments with certain ideas in mind that they would like to support or undermine. There can be many ways to misinterpret data.’

With this in mind, I ask you…

Data suggests that this is the safest time of day. Yet, anecdotally, fewer farmers are putting time in the field at this hour than any other hour of the day(8am-8pm). What’s going on?

Posted by downhousesoftware on April 21, 2014 in Uncategorized

Measles cases are on the rise again in the US. Why is it that this ‘eradicated’ (in the USA) virus is still causing harm?

It’s been about 15 years since Andrew Wakefield first suggested that:

We have identified a chronic enterocolitis in children that may be related to neuropsychiatric dysfunction. In most cases, onset of symptoms was after measles, mumps, and rubella [(MMR)] immunisation. Further investigations are needed to examine this syndrome and its possible relation to this vaccine.(1)

Wakefield clarified this statement in an interview with Brian Deer:

I have to say that there is sufficient anxiety in my own mind of the safety, the long term safety of the polyvalent, that is the MMR vaccination in combination, that I think that it should be suspended in favour of the single vaccines. (2)

Reading the initial publication, there is not a very convincing argument made for the vaccine causing autism. And it would be curious why Wakefield would make such a connection –  except that he was also in the process of forming a company with a patented test for “autistic enterocolitis” that could produce $43 million (US) in revenue for investors according to the prospectus.(3) That might be reason enough. Further, the primary interest that lead to the investigation of whether the MMR vaccine might cause autism came not from a sound scientific hypothesis, but from lawyers willing to pay for study results that could be used in their ongoing prosecution of drug manufacturers. According to the British Medical Journal, Wakefield received $674,000 in compensation as payment for doing this research and also in support of Wakefield’s new diagnostic company, Carmel Healthcare Ltd. (4)

Over the years Wakefield has bobbed and weaved like a boxer shifting his hypotheses on how MMR vaccine causes autism from Measles proteins migrating from the location of the shot, to the gut and then to the brain – to the Mercury preservative, thimerosal – to the number of antigens (immune-stimulating particles) children are faced with as they receive their first vaccines. Nevertheless, his results have not been duplicated (to the extent that they were shown to begin with) and no additional evidence has come forward supporting any of these speculations.

The resulting controversy dealt a heavy blow to immunization efforts in the UK. Meanwhile, in the United states, which officially eradicated Measles in 2000, record numbers of cases are now being reported. So far 20 cases of the disease have been reported in New York (5), while another 32 have been reported in California which “allows parents to opt out of vaccinating their children if they fill out a form stating they don’t believe in vaccinations.”(6)

Thanks, Dr. Wakefield. Most of us have forgotten what Measles looks like. Now we can remember.

For more information about Measles, see the WHO fact sheet:

Posted by downhousesoftware on March 21, 2014 in Uncategorized

The Question of Death

In the film, Questioning Darwin, it is asked of ‘Darwinists’, “How does evolution deal with death?”

I have to admit, I don’t know what this question really means.  Is he asking why there is death? What happens after death?

Several people texted just this question during the live broadcast of the Nye / Ham debate and I didn’t understand it then either. In that context, they had posed this question as something of an experimental challenge to evolutionists and I interpreted it as meaning … ‘ Just wait until you die, heretic. Then you’ll see who’s right.’ Perhaps I had been to quick to this conclusion ?

If there is anyone out there who can explain just what this means, please let me know. Right now it’s nothing but an inside joke that I don’t get.

Posted by downhousesoftware on February 24, 2014 in Uncategorized

Man on the Moon?

The legacy of Andy Kaufman, whether he is truly alive or dead, is one of a man who lived to do performance art. Because of this, rumors of his death being faked will always have some credence and will simultaneously seem like so much bull.

Holy crap! Is that Elvis?!

For years “Elvis Lives” was a great slogan and provided endless opportunities for  ‘Elvis sightings’ at every truck-stop, diner and all-you-can-eat buffet the world over. Although, given his health at the time and intense fame, it doesn’t seem likely that his death was anything of a hoax.

Conversely, Andy was much younger, had a fakable illness and wasn’t so famous that he would be recognizable anywhere. Not only that, I can see him getting tired of having to ‘be’ Andy Kaufman all the time and wanting to take time off. That’s the problem with performance art: if it consumes your life, there’s no time when you can ever really be yourself.

There’s new evidence surfacing that Kaufman may yet have pulled off his last, and greatest, prank. This week, at the Andy Kaufman Annual Award Show for young comedians Monday night in New York City, Andy’s brother, Michael poured it on thick. He said that Kaufman had planned faking his death for some time and even left a letter for Michael declaring that he would re-appear at his favorite restaurant on Christmas Eve 1999.

When Michael went to the restaurant, he was given a letter…

“It was too much pressure to be Andy Kaufman. I just wanted to be Andy,” Michael Kaufman read. “I think that’s why I got sick. I had to change completely and quickly. I’m extremely very happily married with the most wonderful wife in the whole wide world and with the two greatest kids: a 10-year-old daughter and a son who is 8.”

A woman was then brought on stage claiming to be that 10 year old daughter – now 24 years old.

CNN has the best reporting of this whole affair that I have read so far, although many others carry the story as well (and some with great posts in the comment sections).

Michael claims that the girl shared a number of secrets about Andy and his relationship that were very convincing – unfortunately, that just leads us to believe that he, too, is part of the hoax.

Posted by downhousesoftware on November 14, 2013 in Uncategorized

I wasn’t searching for a way to talk about death and the end of life discussions that families must have about it. I was just transporting my son from our home in Paola, KS to his gymnastics class in Lenexa. It’s a thirty minute drive – give or take. Perfect for a good conversation or a couple songs – perfect for a RadioLab Short.

My son is seven and we both like listening to these programs on our drives. I know he’s a little young for much of the material, but it always makes him ask such good questions. It challenges him in his thinking and he gets to see a parent consider and turn over new ideas too.

I wasn’t paying strict attention. I was driving. I was zoning. I was in the audiobook / NPR / Podcast Groove. My eyes on the road, my mind on a walk with the program. We were driving North at about 70 mph and absorbing the program as it pulled us in, bit by bit.

The Bitter End – a short about how doctors and lay people see end of life care through very, VERY different eyes. To be honest, there was nothing very surprising in the discussion on the radio. Despite the fact that I am not a clinician, my viewpoint of end-of-life care was precisely in line with that of most medical professionals that were surveyed in this report.1 But, that’s a completely reasonable consequence of the proximity of my work to the medical field, having many close friends who are physicians -even my wife in a clinician.

The reality is, people who work in and around hospitals and people who’s impression of hospital care is shaped as much or more by real hospitals than those in TV land, have clear, unromantic ideas about what end of life is like. Also, we have seen more and talked about more situations of ‘heroic’ interventions and know what those outcomes look like.

For instance, my aunt had a heroic intervention by a neurosurgeon following her seizure and fall on the stairs that resulted in a severe head injury, best left to its natural conclusion. Instead, I listened to the doc pat himself on the back for his ability to save her life and turn a sudden trauma with a virtual DOA arrival at the hospital into a yearlong struggle with finding her care as she remained in an unresponsive coma. Oh, and I almost forgot, that meant that we had to actively make the decision to withdraw her feeding tube and fluids so she could die slowly over a number of days in the only legal outlet from this terminal condition. So,… thanks, Mr. Surgeon. Good work.

As I said, I was sort of in the zone and not thinking until we came to a stop at a red light and I suddenly remembered my seven-year-old passenger and thought about what we were listening to.

I don’t believe that there is anything wrong with talking about death – even with children. Death comes to us all in time and we all lose parents and friends and other family. Nevertheless, I thought I might want to take a quick exit before the story went too far. But to turn it off, I had to ask if he had been listening (yes) and would he like to talk about what we heard? (also, yes)

I was relieved when he told me that if I was in the hospital and going to die that he would tell the doctors to give me a ‘sleep shot.’ Then he thought about it … and thought about it some more… And then the waterworks started and he was wailing about how I couldn’t even die, nor his mother, nor his grandmother (Oma) – who would mend his blankie?! No. None of us could ever die. And he would tell the doctors to do anything and everything they could to keep us alive for one more day, one more hour, or minute, or second. And when we died, he wanted to die as well. 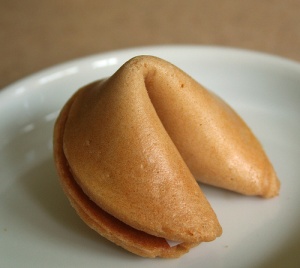 Are you feeling lucky?

I let him cry a bit and brought him back from the brink with some cuddling in the parking lot of the Chinese restaurant we were headed for. Then we had a nice talk about cognitive dissonance before we drowned our sorrows in wonton soup.

Posted by downhousesoftware on January 17, 2013 in Uncategorized