Polio Does Not Go Gentle into that Good Night

So far this year there has been nearly 3 times the global number of cases of Polio as there was last year at this time.

Though wise men at their end know dark is right

It’s not often that scientists will rally around the idea of intentionally pushing an organism to extinction, but this is exactly what disease eradication is – and it is the ultimate goal of all vaccination programs. The eradication of Smallpox has been hailed as one of the great successes in modern medicine. In fact, the philosophical arguments against making eradication the goal are not meant to subvert eradication, but actually to prevent complacence in monitoring programs and to avoid wasting money on tracking down ‘one last case’ of disease.

This said, a goal of the World Health Organization does have an endgame strategy for polio and plans on having it eradicated by 2018.

Rage, rage against the dying of the light.

Despite our best efforts, The Polio Eradication Initiative, in its May 2014 Special Alert, reports, “WHO Director-General Margaret Chan declared the recent international spread of wild poliovirus a ‘public health emergency of international concern,’ and issued Temporary Recommendations under the International Health Regulations (2005) to prevent further spread of the disease as the high season approaches.” This declaration has the weight of international law for the 194 signee countries.

Curse, bless, me now with your fierce tears, I pray.

Obstacles to final eradication remain largely human and political. Thinkprogress.org’s Hayes Brown reports that, “Pakistan has been the epicenter of attacks on vaccination programs, following the revelation that the CIA in 2010 used a fake vaccination campaign to hide their intelligence gathering efforts to locate Osama bin Laden. Since then, the Pakistani Taliban have now come to see all health workers as suspect and prime for targeting”

War, especially civil war, has led to countries such as Somalia, Pakistan and The Gaza Strip of Israel becoming reservoirs for disease and expanding the number of countries with wild polio. 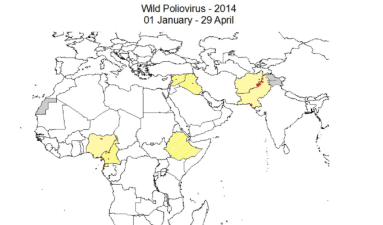 Nevertheless, Even as polio does Rage against our efforts, it is still much reduced and there is no reason to give up hope that a combination of political and medical interventions will be sufficient to add polio to that short list of diseases that are ‘forever gone.’

Posted by downhousesoftware on May 6, 2014 in Uncategorized

I’m looking forward to discussing a bit of epidemiology in my Microbiology class on Tuesday. I’ve been looking at the CDC’s Epidemic Intelligence Service website and a package of case studies obtained from them and I think we can manage at least some of the broader questions without losing valuable time that I am itching to discuss immunology.

While researching, I came across this site by Google that uses search engine terms as a method for tracking flu worldwide. The data is used to create a map like the one shown below. 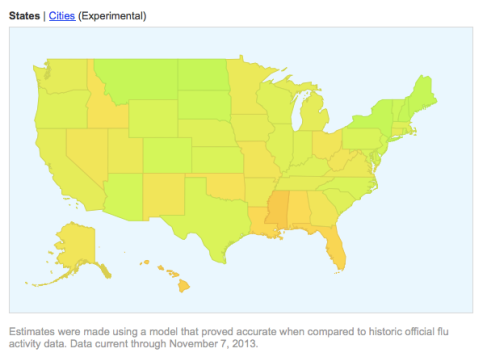 Posted by downhousesoftware on November 8, 2013 in Uncategorized

Yesterday I wrote a quick post about a report of spiking measles cases in Wales as reported by Wales Online. What troubled me was the manner that the data was being presented. In the graph presented in the article, the y-axis is labeled ‘cumulative number of cases’. What bothered me is that this is not ‘new cases’ and I had to go searching through a lot of reporting and data to clarify what the numbers really were.

– Regardless of what I found, it is true that there is a very worrisome spike in Measles cases, but I do not think it serves people well to misrepresent data. Or, perhaps I could state it more clearly as “I still think the data is being presented in a way that does lead to misinterpretation, but not as bad as I thought.”

The BBC shows the epidemic this way:

Since the outbreak began in November, 77 people have needed hospital treatment for the illness.[I’m not sure if this means hospital admission or not.]

Health officials said 1,825 had been seen at four hospitals in Bridgend, Swansea and Neath Port Talbot on Saturday.

The breakdown of people vaccinated were:

The news has increased in urgency with these high numbers of potential cases, and also became more grave as”Gareth Williams, 25, died at his home in Swansea on Thursday.”

In the years prior to the current epidemic, which began in November of 2012, there was a distinct trend of increasing cases, but this has been increased by an order of magnitude over even the worst years. Data from the Public Health Wales Health Protection Division (analogous to the CDC here in the States) show the trend starting, but these data do not include many of the current cases as it cuts off just as the epidemic struck: 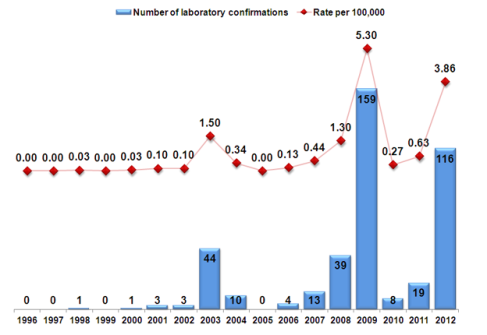 note: this only contains data for the first two months leading into the currernt epidemic

So… my original fear was that data was being unjustly ‘massaged’ in order to present the problem as possibly more serious than it is. After looking at the data, I still think it may not be the best way to present the data, but it does communicate the right message. One thing that I must admit is the difficulty in finding good, raw data that is up to date.

Questions I would like to see answered from this outbreak are:

Has herd immunity been doing much of the ‘protection’ up to this point – also, do/would booster shots  really provide any protection for previously immunized people? (somehow these two go together in my mind)

Posted by downhousesoftware on April 21, 2013 in Uncategorized