Back from the Dead

Halloween seems like a good time to resurrect old blog posts that haven’t seen the sunlight for several years. Creeping out of the tomb is my first blog post about Genes, DNA, Memes, and GMO foods. Rather than post it here, I decided to post it over on my Medium site to see if it can catch some new eyes. 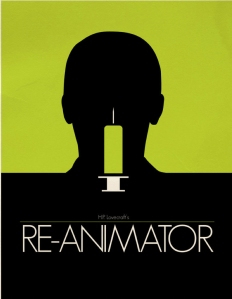 Buy this poster print at: http://fictionalnape.deviantart.com/art/ReAnimator-Poster-359280577

Posted by downhousesoftware on October 26, 2015 in Uncategorized 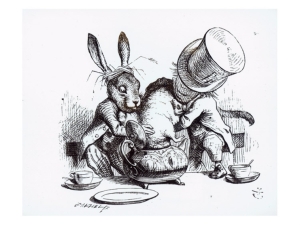 In addition to Genetic Counseling for the cards, your lab has been investigating the genetics of the Dormouse.

Dormice have either the ability to Speak (S) – or are Mute(s).

Additionally, they are either Cruel or Kind.

You wish to map the distance between the Speech and Disposition genes and determine whether Cruelty or Kindness is dominant. (Here, not a metaphysical question)

You begin by obtaining true-breeding animals:

(oh, the cries of misogyny!)

Once bred, this coupling gives rise to a litter of six offspring. All six can speak and are unfailingly kind.

These offspring are then bred to true-breeding homozygous recessive mates. The results of these matings are:

In similar experiments, Cruel, Longhair and Kind,Shorthair animals were examined. Both parentals were true breeding and the F1 litter consistend entirely of Kind, Longhair animals. These F1 were then crossed with homoztgous recessives for both traits, resulting in:

What do these data add to your understanding of Dormouse genetics? Can you map the three genes to one Chromosome? What experiment do you want to do next?

Posted by downhousesoftware on November 8, 2014 in Uncategorized

The first hand : Mendel in Wonderland

In wonderland, much depends upon the suit and rank of a card. In the time of Alice, the Hearts held power, but since then, the Queen of Hearts has been imprisoned and the Kind of Spades now rules the land.

Families now strive to have children of high suits in order to give them the best chance at a good life.

Suit values are as follows:

Two cards come into your clinic to get genetic counseling. They want to know what chance they have of having a Hearts or Spades baby.

Mom is the Three of Hearts

Dad is the Five of Diamonds

They already have three children: a Two of Hearts, a Seven of Clubs, and a Jack of Clubs. 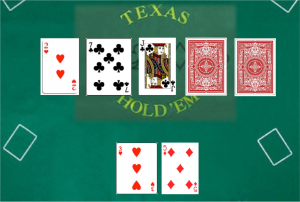 From the information provided above, what do you know?

Is it possible that they can have a Hearts Baby?

Posted by downhousesoftware on November 7, 2014 in Uncategorized

The progress of infection can be summarized as a pathogen going through a series of steps:

The first three steps, ‘Portal of Entry’, through ‘Surviving Host Defences’ encapsulates all of the immune response. Some key events in the immunity are inflammation and the innate  response, antigen processing and presentation, adaptive immunity and memory.

Several of these topics I’ve described here before including an outline of the development of lymphocytes (B and T Cells – sorry NK Cells) in an article here. The activation of B cells here, immunological memory in several places including here.  Some of these topics I have yet to address (e.g. a good discussion of inflammation), and others (e.g. antigen processing and presentation) have been buried in other posts (see my lymphocyte development, B cell Activation or this post on Transmissible tumors).

This time, I thought I’d prevent a sketch of the humoral immune response and how this illustrates, like Mendel’s traits in a dihybrid cross, that each immune reaction is ‘independent’. A typical immune response is outlined below showing the development of antibodies following a primary response and then a more rapid and robust secondary response. If we want to compare this response to Mendel’s monohybrid cross, we can see the same response for antigen after antigen just as Mendel saw the same pattern of inheritance for any single trait he observed. 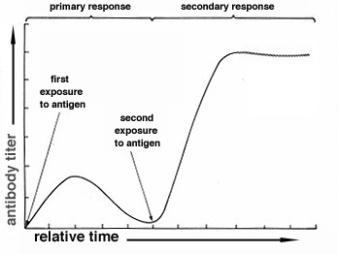 Response to a single antigen

Before we had the ability to ‘see’ this response on a molecular level, we could see its effects on people. Those who previously contracted a disease did not contract that same disease a second time. This immunological memory is the basis for vaccination, where we separate the disease-causing agent from the immunological memory-inducing agent for any given pathogen and then use only the later to vaccinate. 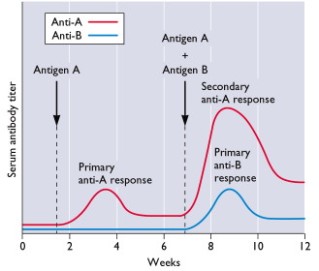 Borrowing a figure from Abul Abbas’ text on Cellular and Molecular Immunology, we see  that the response to one antigen has no bearing on the body’s response to a second, unique antigen. Like Mendel’s dihybrid crosses, the response to two antigens is, indeed, independent. (Note, the serum titer in this graph falls much lower than that in the first illustration – this second curve is more representative for real responses. Regardless, the antibody titer for a secondary response remains higher than that of the primary response.)

To extend the analogy just a bit further, one might ask if there is such a thing in immunology that parallels the ‘linked genes’ of inheritance?

In fact, there is. The world’s first vaccine, developed by Edward Jenner in 1796, involved the use of cowpox pus to induce protective immunity to both cowpox and the related virus, smallpox. This seems to violate our rule of independent immunity, just as the Morgan lab found that genes for body color and wing formation were found to be inherited together in fruit flies, thus violating the Law of Independent Assortment (of alleles).

In the case of cowpox and smallpox, this comes from the similarity in antigens made by each of these viruses. That is, the cowpox antigens the body generates an immune response against are NOT (ENTIRELY) UNIQUE from antigens found in smallpox. When the vaccinated individual is challenged with smallpox, antibodies created to defend against a secondary challenge with cowpox react to the smallpox antigens as if this was a secondary response directed against smallpox. 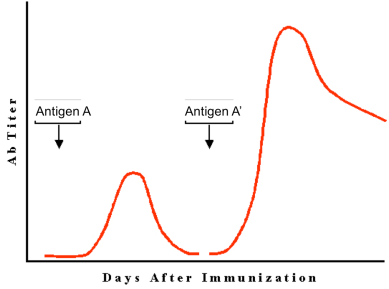 Posted by downhousesoftware on November 25, 2013 in Uncategorized

Last semester I posted an essay introducing inheritance, the idea of factors/alleles, how alleles are distributed into sex cells that combine with other sex cells to bring about a new generation. Looking back on this post, I think it would be a good idea to point to it from here and suggest that all my General Biology students read through it to ensure that they understand the basics of inheritance before we go on.

You can go directly to that post here or drop through the wormhole on the right.

Posted by downhousesoftware on March 27, 2013 in Uncategorized

A first look at Heredity

Oh Boy! Clarification is definitely in order. In this week’s lecture we outlined what it is that we will be covering in Unit II and then started in on a look at inheritance.

What does it mean to inherit something?

What is it that we are inheriting?

How can we understand the principles in operation in such a way that we can even make predictions about what certain crosses will result in?

There are a lot of different ways to approach these questions. The traditional method is to imagine that we are living in the 18th century and don’t know anything about Recombinant DNA Technology or Human Genome Projects or anything about modern science. Have an open mind and just look at what we can see before us.

For many hundreds, or even thousands, of years inheritance was something that people had an intuitive understanding of, but could not really state in a set of rules how the process operated. There were always surprises that didn’t seem to fit the pattern.

On the positive side people were wise enough to breed the big animals with good temperaments while they slaughtered the others for meat. Similarly, the seeds of larger, tastier fruit and more productive trees were replanted, while those from less desirable plants were not. With time, these guidelines resulted in improved crops and farm animals and allowed for a transition from a hunter-gatherer culture to one that was more settled and agricultural.

As the world opened up to commerce between nations, it became more important for each nation to remain competitive, which meant that they would have to work out the rules of inheritance so that they could produce the highest quality animals and crops and textiles and distilled beverages.

This was the world that Mendel was entering. One in which a man who did not seem to fit into the standard societal roles could utilize his talents in the confines of a monastery in Brno and unravel one of the most basic riddles of life. What are the rules of inheritance?

Mendel eventually chose to work with pea plants that he could exert complete control over and carry out his experiments in a slow, methodical manner and document them with copious notes and definitions that explained his work clearly.

How do you work out something like the rules of life? Put yourself in Mendel’s place. Where do you start? 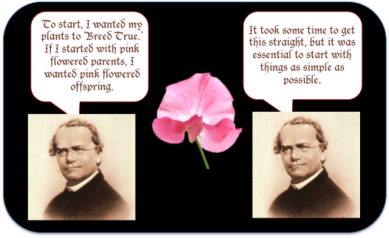 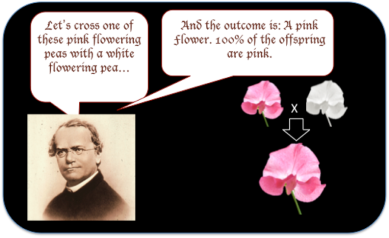 What this did tell him was that there was something about pink that over-rode the instruction to make white flowers. He called this phenomenon ‘Dominance,’ and came up with a rule that whenever two true breeding strains expressing different phenotypes of the same trait are bred together, and 100% of the offspring express just one of the parents’ phenotypes, that one is Dominant. The other is Recessive. 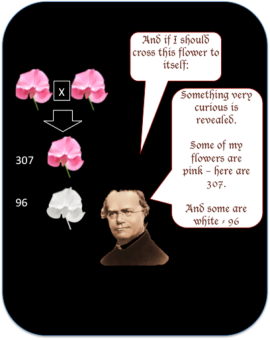 These results would have come as a shock to an earlier naturalist, Kolreuter, who assumed that the traits of the parents are blended in the offspring. Mendel’s experiments refuted this blending theory of inheritance by demonstrating that the F1 generation (that produced from the crossing of the True breeding parentals) would all express only the dominant parent’s form of a trait. Further, when this F1 was crossed to itself, the two parental forms were produced again.

The units of heredity are particles – not a liquid that is blended!

But there is more to it! These data, and more like it, demonstrated an interesting pattern in the offspring that gave Mendel a mathematical clue. No matter what trait he followed in his flowers, the same ratio of trait expressions in the offspring appeared – always 3:1. Whatever the number of what he called the recessive trait, he always say three times that number of the dominant trait.

He reasoned that this result was due to the particles of inheritance, which he called factors. From these data he proposed his Law of Segregation:

Instead of flowers, let us imagine a human couple. Both have brown eyes, but the man is carrying two factors from brown eyes while the woman has one factor for brown eyes and one for blue. Her eyes appear brown though because the brown factor is dominant.

Let B = the Brown eye factor

b = the blue eye factor 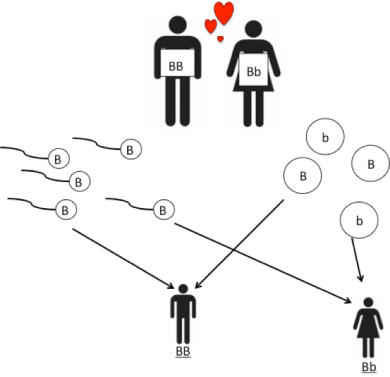 From Law of Segregation Part 1: Each individual has two factors for each trait

Because each of them has at least one copy of the dominant factor, that is what they express – brown eyes.

From Law of Segregation Parts 2 and 3: Factors separate during formation of the gametes – and – Each gamete has only one factor for each trait

The man makes sperm that contain one of his factors. Because he has two ‘B’s, all his sperm carry the ‘B’ factor.

From Law of Segregation Part 4: Fertilization gives the new individual two factors for each trait (one from each parent)

The offspring get one factor from each parent (carried in the sex cells) resulting in new individuals with two factors. The expression of the trait depends on what factors they get.

Years later, at Cambridge, Reginald Punnett devised a much simpler way to depict these interactions visually in what is called a Punnett Square.

As this post is getting long, I think I’ll lay off here. This covers the main elements of what we discussed in class this week and I’d rather start another post later to continue.

Posted by downhousesoftware on November 8, 2012 in Uncategorized