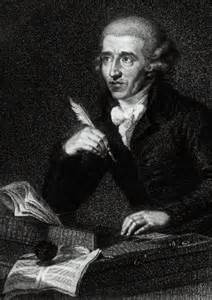 In 1791 Mozart died while working on a beautiful piece of music, his Mass in D minor. I love much of Mozart’s work, but I think that this is probably my favorite (perhaps a tie with The Marriage of Figaro). Yet, there has always been discussion about how much Mozart, himself, completed and how much his friend and copyist (possibly student), Franz Sussmayr, wrote as he completed the manuscript for delivery to Count Franz von Wallsegg in 1792.

What is relevant here is that it does not really matter to me who wrote it. It’s attributed to Mozart, so I assume that he did the majority of the work in at least shaping it and providing hints as to how it would develop.

Similar accusations have been raised about Harper Lee’s authoring (or lack of authoring) To Kill a Mockingbird, and now Go Set a Watchman. Ms. Lee was good friends with another iconic writer, Truman Capote. The two were childhood friends, and she worked with him for some time as an research assistant for his opus, In Cold Blood.

To answer this, Maciej Eder and Jan Rybicki assembled a data analysis algorithm to analyze writing styles. With only a single novel, it is difficult to say much about the authorship (of Mockingbird), however, with the release of a second novel, a data analysis technique known as ‘cluster analysis’ becomes more meaningful. Using a number of analyses, the two data miners assert that Ms. Lee’s voice is her own, distinct from Capote’s. One of these analyses is presented below (taken from the Computational Stylistics Group website), examining most- frequent -word usages by Lee and a number of other Southern Authors. 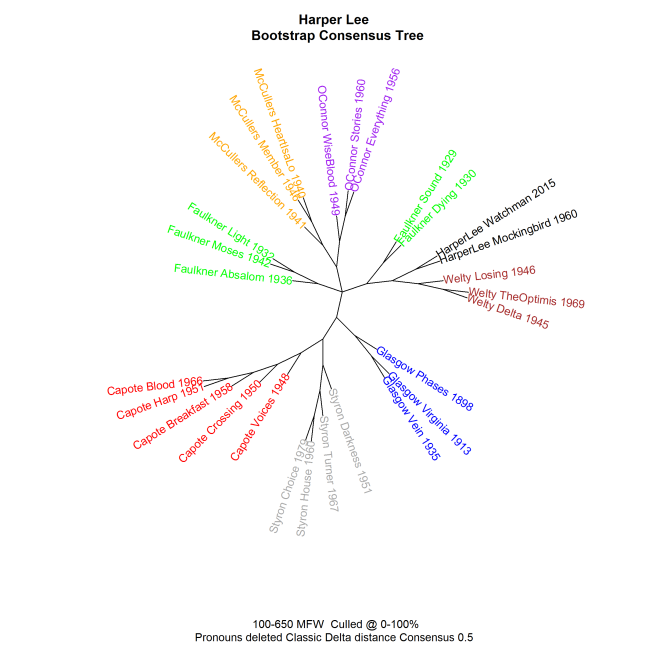 We see that both of Lee’s books cluster together (as do other authors), and that her own style appears to more closely resemble authors that she professed were influential to her rather then that of her friend, Capote.

What is most important to me though is how I feel about the text. At this point I am nearing the end, but have not gone far enough that I can say definitively what my conclusions are. I admit that it took some time to get into the novel – the first chapter or so didn’t feel right to me – but most of the book has developed well in my opinion. I think what will make or break this book in terms of real importance to me is where things go with respect to the central question of race that it deals with.

Regardless of that conclusion, I have greatly enjoyed this book (as I did Mockingbird), for its ability to transport the reader into the mind and body of the protagonist, Scout. Taking us in a journey through time – twice! Once to Scout’s childhood, and again to her adulthood, still many years past now, just after World War II.

These books and Mozart’s Requiem Mass, they are what they are. And I intend to enjoy them by that standard.

The Requiem would be no less a masterpiece if it was written by Donald Duck. And Go Set a Watchman is what it is regardless of who wrote it or who wanted it published. The fact is, it’s out there and the whole world is devouring it this week. I say, discuss the politics of the book all you want, it’s all quite interesting too, but judge it on its own merits, irrespective of all these other questions.

That said… are you reading it? What do you think? I’ll probably be finished by the time anyone gets around to reading this, so answer as thoroughly as you like. Let’s consider this a SPOLIER ALERT for anything beyond this point – don’t read the comments if you have not finished the text. (OK, with all that lead up, I need some comments….)

Posted by downhousesoftware on July 17, 2015 in Uncategorized 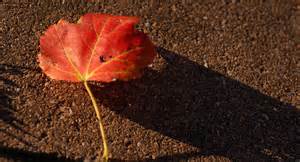 There’s no pressure on Harper Lee.

No. She’s already published one of the world’s most beloved novels. Even people who haven’t read ‘To Kill a Mockingbird’ know her characters, Atticus Finch and his daughter, Scout.

And it’s only been half a century that her fans have waited for a second book, all the while singing the praises of Mockingbird:

“With its slow, warm and evocative opening chapters, Mockingbird starts off like a sultry summer day…” – Will Errickson , Five Stars

“…I am completely awed by this story.” –Dianna Setterfield, Five Stars

So, no pressure Ms. Lee. And, when your new book comes out tomorrow, I suggest that you turn off the TV, turn off the radio, and maybe read a good book.*

So far, all I know is the cover, and that looks like a good start. 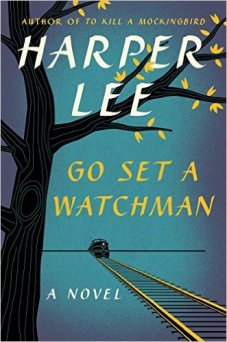 *I realize this may sound callous after Ms. Lee’s stroke in 2007 that rendered her largely blind and deaf, but I certainly don’t mean to be.

Posted by downhousesoftware on July 13, 2015 in Uncategorized