Cell Cycle in intimately connected to cancer because, in essence, cancer is a disease of cell cycle dysregulation. The purpose of regulating the cell cycle is to maintain genomic integrity, therefore the checkpoints of cell cycle progression specifically interrogate the DNA’s suitability to replicate, to divide and to be assorted into new, ‘daughter’ cells. 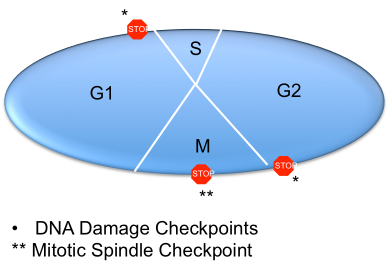 If a cell replicates DNA when there is damage to the DNA, then poor copies are perpetuated. If a cell commits to division when there is DNA damage, the same result might ensue – i.e. daughter cells may receive poor copies of the DNA. If a cell divides when chromosomes are not properly assorted then neither cell is healthy.

With cell cycle checkpoints intact, cells can only pass when their DNA is in good condition or when chromosomes are being handled properly. The result is one healthy cell gives rise to two healthy cells. If a cell reaches a checkpoint and damage is detected, then the cell ‘arrests’ cycle progression for a short period of time. During this arrest, the cell has the opportunity to rescue the DNA and resume cycling. If this does not happen, then the cell is triggered to commit apoptosis –  cellular suicide. In this was, the cell gives its life for the good of the organism.

In this way, the cell is very analogous to a bee stinging an intruder. Although the bee will die now, it has contributed to the good of the colony in its sacrifice. After all, the worker bee cannot reproduce herself, her genetic heritage is intimately tied to the fate of the colony and its queen. Similarly, the cell dies to preserve the organism against what might be a harmful alteration / mutation. And, like the bee, this cell likely could not reproduce by itself anyway, it’s genetic heritage is tied to that of a larger body where only the gonads produce reproductive cells.

When cell cycle checkpoints are not functional, poor copies of DNA / cells get through. Furthermore, these cells are now inherently unstable because they have a compromised checkpoint, and additional errors may accumulate. Sometimes these errors disrupt other regulators of cell cycle, leading to a compounded problem. Over time, these cells may develop into cancerous cells.

The other point of cell cycle regulation is in the midst of mitosis, during metaphase. At this time, the cell has bound the chromosomes with spindle fibers that attempt to shorten and pull the chromosomes to a flat plane in the middle of the cell called the metaphase plate. The checkpoint here is to find out whether every single chromosome has attached to each side and each daughter cell will get the correct number. If this fails, cells will have incorrect distributions of the chromosomes and are unlikely to survive. Further, if these cells did survive, they would never be able to correct the error.

Here, the bee analogy would be too strained to continue, but it is not too difficult to see that when a cell disentangles itself from preserving the health of the body and instead looks only after its own short-sighted interests that these cells will grow and compete directly against the rest of the body for space and resources. Initially, when a tumor is small, this may have little consequence, but as a tumor becomes larger or more dispersed in the body, this selfishness can severely impact the larger organism, ironically (for the cancer cell) undermining even the tumor’s self interest.

Posted by downhousesoftware on October 14, 2012 in Education, Uncategorized